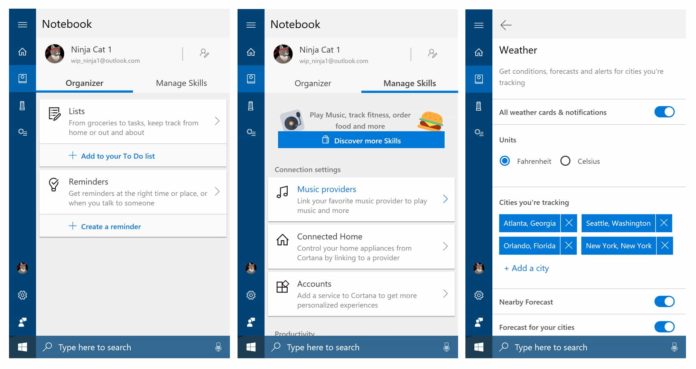 Microsoft today pushed out a new Windows 10 Insider Preview Build 17063 for Fast Ring Insiders with lots of new features and improvements. The latest build comes with the most awaited Timeline feature and improvements to Microsoft Edge browser and more. For the complete change log you can refer our previous article.

The Digital Assistant’s Notebook is unveiled with a new UX making it more responsive to Cortana’s capabilities and allowing users to easily complete their tasks. A  new Organizer has been included which lets users access lists and reminders with ease. Users can easily configure Cortana as all the Skills have been now brought together.

You will also find a new Tabbed view to segregate content in a single page to manage the Skills of the Digital Assistant for discovering more contents.

The company has now moved the Account entry point to the navigation side bar menu which now improves the discoverability and consistency of Cortana. Lists and Collections have now been merged into one giving personalized suggestions with a new and rich interface.

You will also be able to track your To Do’s and manage Grocery lists with Cortana suggesting you items like restaurants, recipes, movies to watch and more in the new Lists and suggestions section. The Lists and Collections section can be accessed from the Notebook, which is currently available only for Insiders using US English and are logged in to both Windows and Cortana with the same Microsoft Account.

Cortana Collections have also undergone changes in the latest build with users now finding their existing saved list items under suggestions and if they want to keep the suggestions they would need to drag and drop them back into the list.

Users will now be able to use Cortana to control music playback on their favorite music apps with the company enabling language compatibility for Spotify, but for users with US English only. Users would need to get the latest app update and sign into Spotify in the notebook music section to listen to their favorite tracks. However you would need to have a free or premium Spotify account to try the new Cortana feature.

The latest Insider Windows 10 Preview Build is currently rolling out and you can check it by going to Settings > Update & Security > Check for Updates.