Microsoft has released Windows 10 Mobile build 10586.218 to the Insider program’s Release Preview ring. We had already reported a couple of days ago that the build was uploaded on Microsoft update catalog. In Build 10586.218 , All apps list background fade bug has been fixed. Along with this fix, there are other bug fixes as well. It is assumed to be the last Cumulative update for this branch of Windows 10 Mobile. 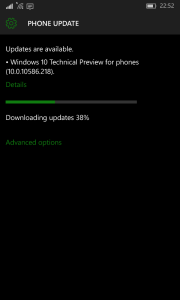