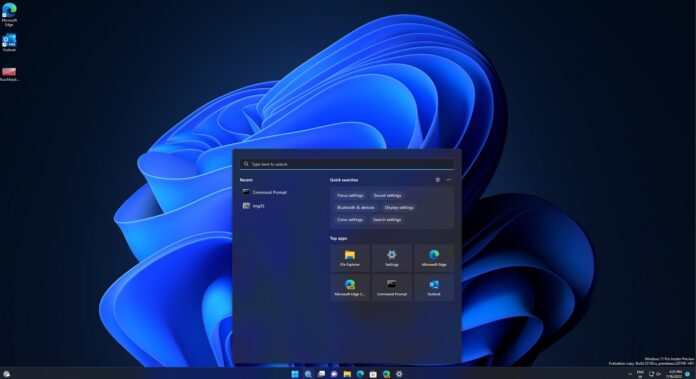 Windows 11 taskbar is getting a new feature, but it’s not the one you were hoping for. While features like the ability to move the taskbar or ungroup icons remain missing, Microsoft is now exploring support for a Windows 10-like search bar. Additionally, Microsoft is also working on new design styles for the taskbar’s search feature.

As we reported recently, Microsoft has been testing a new ‘search’ box that would appear on the left-hand side of the taskbar. Unlike the existing search feature which is an icon, this new search bar is similar to the one we have on Windows 10 taskbar, but it fits in with Windows 11’s modern look.

In our tests, we observed that the search bar works in a similar fashion and there are no visible changes to the search experience. You can still use it to search for apps, games, documents, pictures, and the web.

The search bar is now being tested with users in the Dev Channel, and it is expected to appear in the OS later this year.

There’s no denying that Windows 11 taskbar is a mess and it’s long overdue for a big update that will restore the missing features. While the ability to drag and drop files onto a pinned app on the taskbar will be making a comeback later this year, there are many missing features that people have been asking for since the launch of Windows 11.

The search box isn’t one of the requested features. In fact, many users replace their search box in Windows 10 with a simple icon and many people would just open the Start menu.

Unfortunately, some of the most requested features from users won’t be appearing any time soon.

For those unaware, Microsoft radically redesigned the taskbar by rebuilding it from scratch. The new taskbar doesn’t come with features available in Windows 10 and one of the most noticeable features “full-fledged right-click” menu is no longer available.

Likewise, Microsoft has also disabled the ability to change the location of the taskbar citing “workflow” as one of the reasons.

In a recent Windows Insider webcast, the company clearly confirmed that other features won’t be coming any time soon. However, some taskbar improvements are planned for 2022 and they may appear in the upcoming preview builds.