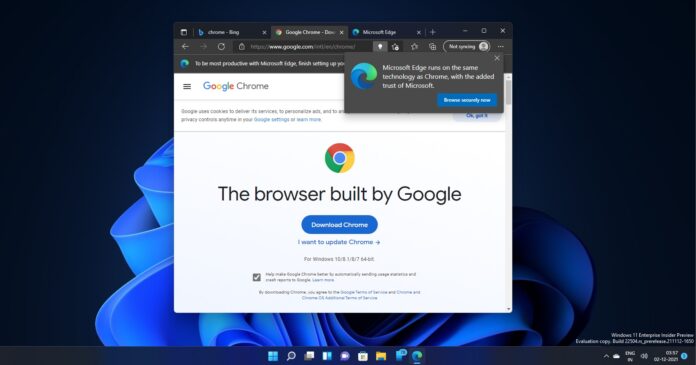 In both stable builds of Windows 11 and Microsoft Edge, we’ve spotted a new popup alert trying to discourage users from downloading Chrome.

Back when Windows 10 was introduced, users preferred Chrome or Firefox over Microsoft Edge on Windows, which led Microsoft to redesign the browser using Chromium open-source engine. Edge is now a much more attractive web browser, but the tech giant has been getting desperate in its attempt to get you to use its new web browser

Microsoft has found another way to discourage users from downloading Chrome – this time by popping up a new message in Edge’s toolbar that asks you to keep using Edge for better security. 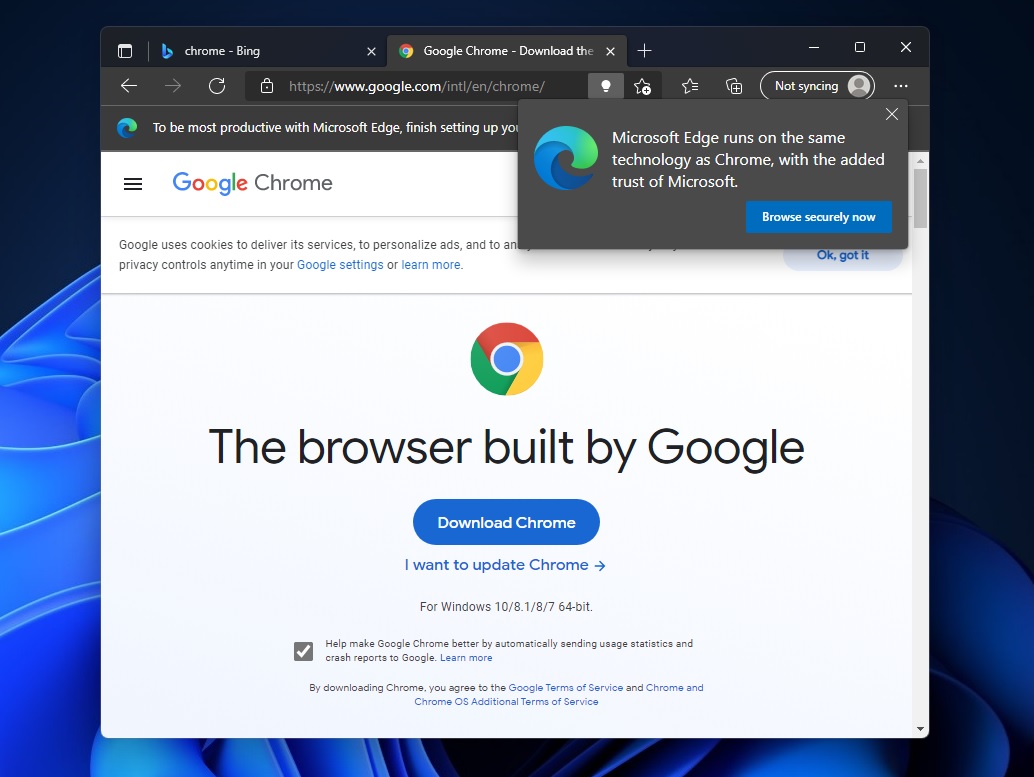 As you can see in the above screenshot, this “browse securely message” pops up in the stable build of Edge and it only targets users visiting Chrome’s download page, so you won’t get the same alert if you try to install Firefox, Vivaldi or Opera.

“Microsoft Edge runs on the same technology as Chrome, with the added trust of Microsoft,” the message reads.

It also includes a button titled “browser securely now” which redirects users to a webpage highlighting performance, security and other benefits of Edge over other browsers.

This message won’t appear for most people using Edge stable at the moment (unless they are part of the A/B testing group). In our tests, we observed that the notification alert is triggered by a server-side update, so it has nothing to do with the build revision number of Windows 11.

It’s also worth pointing out that the alert appears when users try to visit Chrome’s download page using any search engine (Bing or Google itself).

Of course, Windows 11’s new alert won’t prevent users from installing Chrome, but the message is clearly designed to discourse users from trying Chrome which is less secure than Edge (according to Microsoft). This can be considered misleading by some folks as both browsers use the same underlying tech.

Interestingly, Microsoft Edge nagging is currently exclusive to Windows 11, so users on Windows 10 won’t see the alert, at least for now.

Google does the same thing (sort of)

While Microsoft’s practical is unethical, let’s not forget that Google is guilty of using similar tactics against its rivals.

Google has always used its popular services to scare people away from using Edge. In early 2020, Google quietly updated its Chrome web store with a security alert to scare Edge users into switching to Chrome.