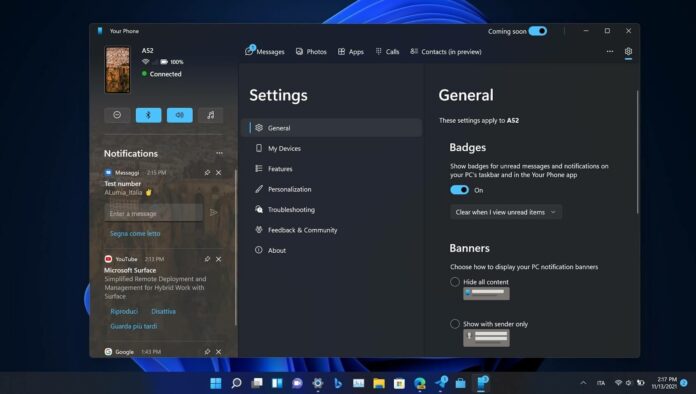 During the Surface Laptop Studio event, Microsoft briefly teased an updated look for its Your Phone app. In addition to a new Microsoft Store, Paint app, Photos app, Calculator, and other native apps, it appears that the Your Phone app is getting a similar makeover on Windows 11 and even Windows 10.

As you’re probably aware, Microsoft’s Your Phone app comes preinstalled on all Windows PCs and it basically allows users to manage their apps, phone calls, messages, and even notifications. Your Phone app can also be used to mirror the phone’s screen to the desktop or run mobile apps within the Your Phone app window.

The Your Phone app update doesn’t appear to include any new feature, but the new design is going to change the way you use the notification panel. The interface has been redesigned and the notifications feed now appears on the left-hand panel, while the navigation bar (which previously appeared on the left side) has been moved to the top.

While the update doesn’t really offer any new functionality, this new navigation panel will allow users to quickly respond to texts. You can still pin messages, dismiss notifications or turn off the notifications completely for some apps.

“Experience the latest, visuals and view of your notifications and important controls for your Android device. Navigate through your content from the top of the app, so you have a larger and more organized view of what’s important,” Microsoft says in a new “coming soon” dialog within the Your Phone app.

As you can see in the above screenshots, Your Phone app is now in line with the new Windows 11 aesthetic. It has WinUI controls, rounded corners and a soft colour palette which looks nice especially when you’re using dark mode.

Microsoft is also planning to make the interface cleaner and less cluttered feel with easier access to important notifications.

Historically, Microsoft has always tested its app redesigns or updates with a handful of users. Your Phone app is still under development and it will begin rolling out to testers in the Windows Insiders program later this year.

In addition to a new Your Phone app experience, Microsoft is also working on a new media player for Windows 11.