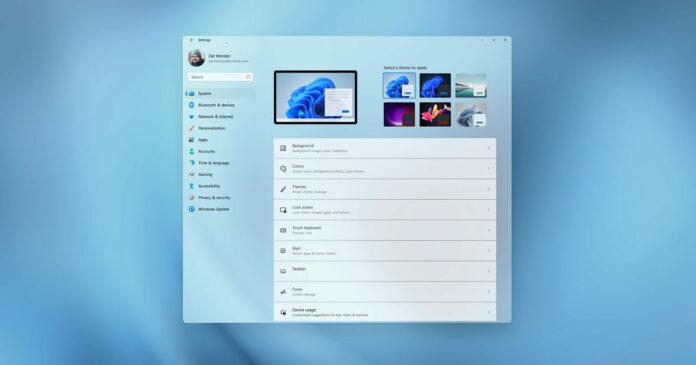 Microsoft has begun work on the major Windows 11 release expected to land in the second half of 2022 and Windows 11 Build 22449 is now rolling out to supported PCs in the Dev Channel of the Windows Insider program. It’s the first test build from the company’s active development branch internally known as “Nickel”.

If you have a supported device in the Dev Channel, you will get a new patch titled “Windows 11 Insider Preview 22449.1000 (rs_prerelease)”. As mentioned, it is from the active development branch, so Windows 11 Build 22449 number is higher than the preview builds you’ve been receiving in Dev or Beta channel.

What’s happening here is that the development of Windows 11 has reached the point where its first public build is almost due and Microsoft has begun work on Windows 11 upcoming features, releasing an initial build to supported PCs in the Dev Channel of the Insider program.

The build 22449 is from the active development branch (RS_PRERELEASE) and it is not tied to any particular release. However, it is likely that some of the features and improvements included in these builds will ship to the consumers in the second half of 2022 with Windows 11 version 22H2 (codenamed Copper).

For those unaware, the codenames of these Windows update release semesters is based on the corresponding element in the periodic table. At the moment, we’re getting builds from a development branch currently codenamed “Nickel”, but this is temporary and these changes will eventually appear in Windows 11 22H2 codenamed “Copper”.

The highlighted elements in the above table represent the following development branch/version:

Dev Channel builds will be buggier than the builds currently available in the Beta Channel. If you wish to remain on Windows 11 version 21H2 (Build 22000), immediately switch to the Beta Channel or opt out of the Windows Insider Program.

So what are the major changes in Windows 11 Build 22449.1000? Well, there’s nothing huge here. That’s because the build is from the earliest stage in the company’s development cycle and users won’t see major changes at the moment.

Features and Improvements in Windows 11 Build 22449

The first update from the Nickel branch directly affects the SMB compression behaviour. For those unaware, SMB compression is a feature that allows enterprises and apps to request compression of files when they transfer over the network.

Currently, MB compression would compress the first 500MiB of a file during transfer and it will stop working if fewer than 100 Mib were compressible. This behaviour has changed with the update rolling out today and Microsoft will now always attempt to compress the rest of the file.

Build 22449 comes with one change to the Windows startup sound. After the update, Windows will no longer play startup sound after a scheduled update is applied and your device reboots when you are not actively using it.

Likewise, the notification center is getting some minor improvements. The notification toasts now have an acrylic background and Bluetooth entry in Quick Settings now opens the main Bluetooth settings if you right-click on it and select Settings.

The notification center design has been adjusted and apps will now appear visually separated to create a floating experience.

It’s important to understand that the update is only available for devices that meet the official hardware requirements (newer processor, TPM 2.0 and Secure Boot).

On top of the Windows 11 Nickel preview release, Microsoft has shipped a new preview – Build 22000.176 for testers in the Beta channel. This update is also available to those with unsupported devices in Dev Channel.

New builds in the Beta channel will mostly consist of bug fixes. On the other hand, Dev Channel or Nickel builds are expected to include new features including support Windows Subsystem for Android.