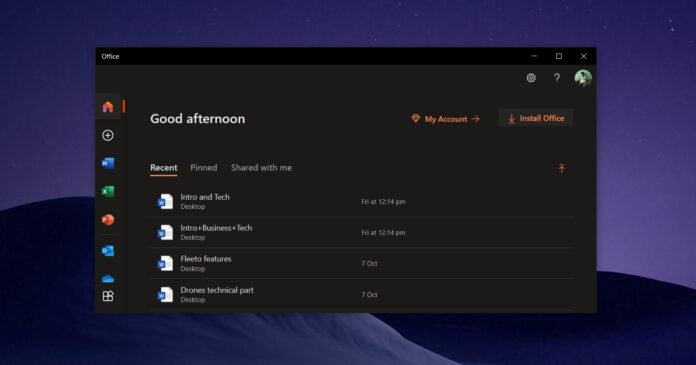 Microsoft has been slowly ditching native apps with Progressive Web Apps in the Windows Store. In 2019, Microsoft replaced the native Windows app “My Office” with “Office”, which is essentially a web app that allows anyone to access Office.com without opening a browser.

Microsoft is now working on a new version of the Office app that will replace the app currently available and act as a central hub for Word, PowerPoint, and Excel. The new Office app aims to provide a more useful way for users to search, upload and view Office documents for free.

Though the Office hub has always been a web app, this new version will be based on the latest web technology (presumably WebView 2). As a result, the brand-new Office app for Windows 10 will offer improved performance, reliability, and more.

In addition to performance improvements, Microsoft is also introducing a new feature that will allow users to open more than one instance of the web app at the same time.

Microsoft is not changing the interface of the new web app, but there’ll be a few noticable improvements. For example, Microsoft is introducing a new cleaner app header and the navigation button is being retained for tablet users.

As per a statement from the company, the new Office app will begin rolling out in early June and it would become available for everyone by the end of the month.

“Users without Win32 [traditional paid Office apps] installed will be able to view files directly in the Office App for Desktop, and be able to compare documents [by launching multiple instances of the app],” the company said in a new message posted on Microsoft 365 Admin Portal.

For those unaware, the Office app is based on Office.com and it is free to use with some limitations. It also comes preinstalled with Windows 10 November 2019 Update or newer, and users don’t need an Office 365 subscription to use it.

If you don’t have it installed for some reasons, you can always install it from the Microsoft Store manually.