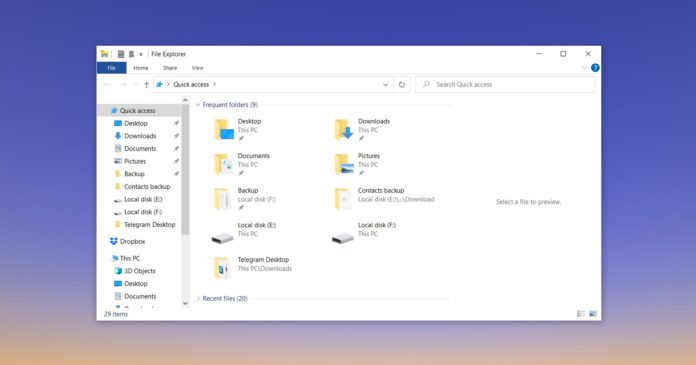 The upcoming Windows 10 version 21H1 looks set to finally fix long-standing bugs in File Explorer. After the November 2019 Update, some users have been having issues with File Explorer’s integrated search platform, which was designed to offer a faster search experience with a new preview UI.

With Windows 10’s May 2020 Update, Microsoft addressed the search bar performance concerns and restored support for right-click. However, some users still complained that the File Explorer window freezes and “explorer.exe” results in high resources usage.

On 15th March, Microsoft started rolling out a new cumulative update for Windows 10 21H1 preview and the update has finally fixed a rare issue that might cause explorer.exe to consume high amounts of memory.

With Build 19043.899, Microsoft has also fixed an issue where the column header would get stuck on “Computing Filters” or do nothing when you click on filters, as shown in the screenshot below.

In our tests, we observed that the bug also exists in Windows 10 version 20H2/2004 and the column header would never actually display any filters.

Notably, this is experienced only when you do a search in File Explorer and click the arrow next to a column header to see a list of available filters for the search results.

In addition to better performance and improvements for search filters, Microsoft has also addressed an issue that might cause the File Explorer window to stop responding for several minutes. This issue is experienced only when you reconnect to a network and use mapped drives.

While most of the critical issues are now fixed, a rare bug where the File Explorer search box stops responding remains unpatched.