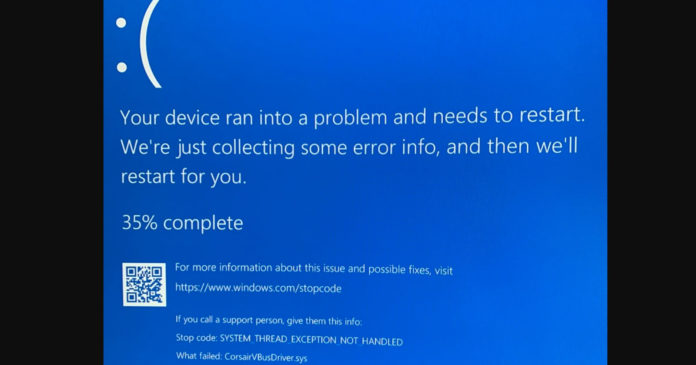 A new bug in a recent Windows 10 update or a driver update pushed out via Windows Update is crashing some devices with CorsairVBusDriver.sys failure. The Blue Screen of Death error message is “System Thread Exception Not Handled” and it prevents the system from booting to the desktop.

According to several user reports, Windows 10 has been going crazy for some users in last one week, with an error “CorsairVBusDriver.sys” that could potentially leave the machine stuck in a boot loop.

For those unaware, CorsairVBusDriver is a component shipped with drivers compiled by Corsair, a hardware company. The problem with CorsairVBusDriver.sys has apparently been hanging around for two months, but it became more prevalent last week when Windows 10 December 2020 updates were released.

It’s possible that the problem is linked to this month’s cumulative update which has already caused other problems for a lot of people. If you haven’t received the Blue Screen error, but you have Corsair products installed, make sure to hit the pause update button in Windows Update.

Fortunately, a fix for “System Thread Exception Not Handled” BSOD error caused by CorsairVBusDriver.sys has now been discovered by some users.

How to fix CorsairVBusDriver.sys error in Windows 10

If you followed the steps correctly, Windows 10 will boot to the desktop again and you would need to uninstall Corsair Utility Engine (CUE) and drivers to prevent the Blue Screen of Death error.

If you’re unable to boot to the desktop, open Command Prompt window again and enter into the drive where Windows 10 is installed, and then follow these steps:

In all the above commands, ‘C:’ would be the drive letter of your OS drive. Once done, close the Command Prompt window, restart your device and it will boot to the desktop again.