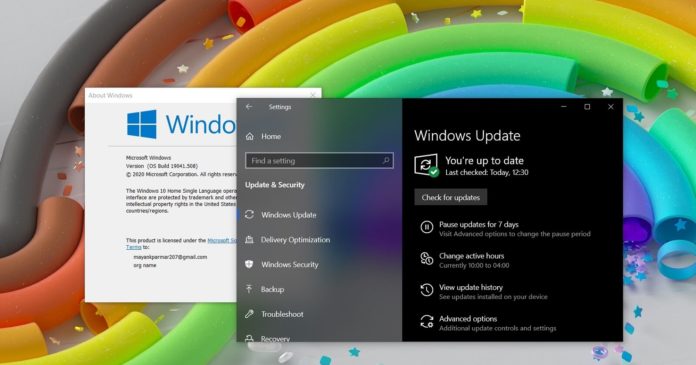 For those still using Windows 10 version 1903 and version 1909, a new cumulative update is now available. Unsurprisingly, the tech giant has again published the direct download links for Windows 10 KB4586786 offline installers, so you can easily get your device up-to-date.

Windows 10 KB4586786 is a security-centric update, so it comes with security fixes only and there are no new major features. Microsoft has confirmed that the update will be downloaded automatically, but the installation depends on the active hour settings configured by you.

This patch comes with one new feature that will allow you to check the changelog of a feature update directly from Settings > Update & Security > Windows Update.

Microsoft says it has resolved an issue where Xbox Game pass subscription won’t work properly and users will get errors when downloading games.

Microsoft has also resolved one critical issue that causes the screen to flash constantly. It’s unclear what caused screen flashes, but Microsoft is promising that it won’t happen again if you apply November update.

Windows 10 Build 18363.1198 fixes one annoying problem that causes printer or to disappear. When this happens, you won’t be able to use your USB printer when the device is turned off and on again.

Microsoft has already confirmed that it is ending support for Windows 10 version 1903, also known as May 2019 Update.

Windows 10 1903 was a big release with numerous new features, such as Windows Sandbox and new search experience. However, it was plagued by problems and Microsoft delayed it for months.

If you’re still using it for whatever reason, it’s time to move on and upgrade to the latest version, such as Windows 10 version 2004.

Microsoft will end support for Windows 10 version 1903 in December, according to a support bulletin published earlier this month.

Next month, Microsoft will also begin the process of poking those still running the Windows 10 version 1903 into upgrading to the November 2019 Update (version 1909).

If you don’t update your device manually, Microsoft says it will forcefully upgrade your machine. For those using version 1909, Microsoft says they’ll be upgraded to version 2004 automatically next year.