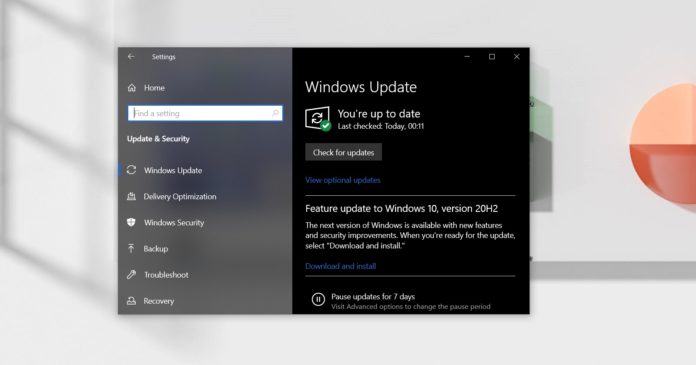 In a new update to its documentation, Microsoft noted that the October 2020 Update is still not available for everyone. If you want to get it now, you will need to hit the ‘Check for updates’ button and wait until the update is offered to your device.

Microsoft also noted that they’re throttling the availability of Windows 10 version 20H2 to ensure a reliable download experience. In other words, some of you may not see the update even when you try to become a seeker.

In another support documentation, Microsoft confirmed that users should first download and install the following updates before applying Windows 10 October 2020 Update:

Windows 10 version 2004 and version 20H2 share the core operating system and both versions have an identical set of system files. Windows 10 20H2 is also identical to November 2019 Update, but version 20H2 package size is larger than version 1909 due to one file – Microsoft Edge standalone installer.

In the same support document, Microsoft noted that Windows 10 October 2020 Update comes with Edge standalone installer that weighs around 88mb. If you take Microsoft Edge out of the equation, this feature update is actually just a small “enablement package” that weighs less than 1mb.

The biggest change in the October 2020 Update is the “new” Edge browser. The new version is based on Chromium and Microsoft is bundling the Edge standalone installer for smooth upgrade experience.

Microsoft Edge’s Chromium edition is efficient and smooth, and it hides the classic Edge browser.