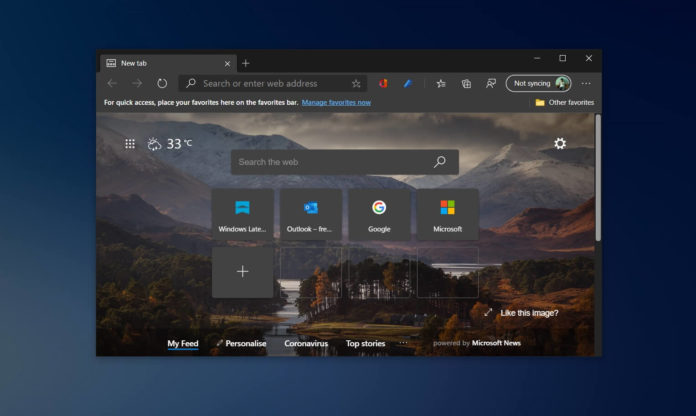 Microsoft’s new Edge is slowly heading to all devices via Windows Update and it also comes pre-installed with Windows 10 October 2020 Update. While Chromium underpinnings enable access to more extensions and a couple of new features, all these improvements come at cost of performance.

Microsoft Edge has always been faster than Google Chrome, but after switching to Chromium, Edge’s RAM usage also increased. To reduce the impact, Microsoft started working on a number of new features that enable better memory and CPU management.

These features have helped Microsoft improve the benchmark scores of Edge by 13%. In April, Microsoft says they added several scrolling features to improve touch, scrolling and clicks accuracy on Windows.

With Windows 10 May 2020 Update, Microsoft Edge’s memory usage also reduced significantly. The company claims Chromium Edge memory usage dropped by up to 27% after the developers implemented “SegmentHeap”, which is a new feature available for Win32 apps.

Since Edge is faster after implementing SegmentHeap, Google has also decided to use the same feature for Google Chrome, which is also built on the Chromium platform.

Last year, Microsoft also shrunk the size of their browser by almost 50%.

While reducing RAM usage in any browser is important, it appears that Microsoft is working on other areas to make Edge faster. Microsoft says they’ve just “started” and more performance improvements will be released in the coming months

PDF, security and other Edge improvements

At Ignite 2020, Microsoft confirmed that Edge is getting support for notes in PDFs, which should users collaborate on the same document. Likewise, Edge is also getting support to view and validate PDF digital signatures.

Microsoft is planning to begin rolling out PDF improvements next month along with Edge’s Linux version.