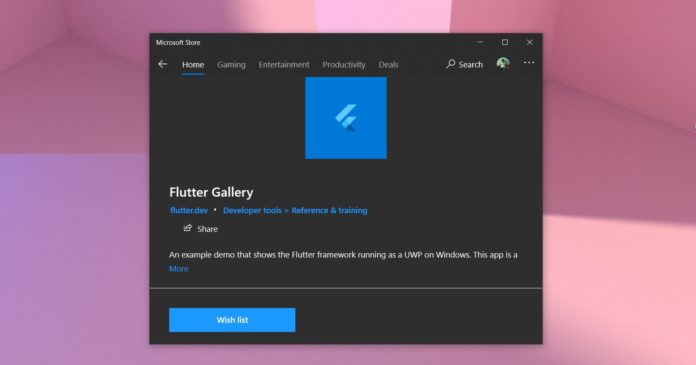 Flutter cross-platform UI framework is one of the fastest-growing languages on Github for mobile apps, web apps, and even desktop apps. Google first announced Flutter in December 2018 for the mobile platform before expanding the frameworks to the web, macOS, Linux, and now Windows 10.

According to Google, more than 500,000 developers are already using the framework and 80,000 Flutter-built Android apps have been published to Google Play Store so far.

Microsoft has also offered support for Flutter frameworks on Surface Duo via its SDK and Flutter samples.

Google has already confirmed that Windows desktop support is in technical preview, but the tooling isn’t yet stable. Previously, Google suggested that Flutter could be supported on Win32 and UWP apps via an ’embedder’ where Flutter can be embedded.

Now, it appears that Flutter UWP apps could be coming to the Windows 10 Store sooner than expected if a new Proof of Concept (PoC) is taken into consideration.

According to a new Microsoft Store listing, it appears that someone from Google’s Flutter desktop development team has published an example (proof-of-concept) that shows off a UWP app made using the Flutter framework for Windows 10.

“An example demo that shows the Flutter framework running as a UWP on Windows. This app is a proof-of-concept at this time,” the Microsoft Store listing reads.

Strangely, this Microsoft Store listing isn’t discoverable with web search engines, which appears to suggest that Google is not yet ready to share more details.

According to a bug post on Github, Googlers are working with Microsoft to enable UWP support in Flutter frameworks. Based on recent discussions, Google is currently trying to figure out how they’re going to enable debugging, hot reload, etc for the UWP-based Flutter apps.

In June, Tim Sneath, a Google product manager for Dart and Flutter – noted that Flutter would make a great fit for Windows 10, 10X, Surface devices, and even Win32 desktop apps.

“[We] would gladly support a close collaboration with Microsoft to build a high-quality solution,” Google’s product manager said.