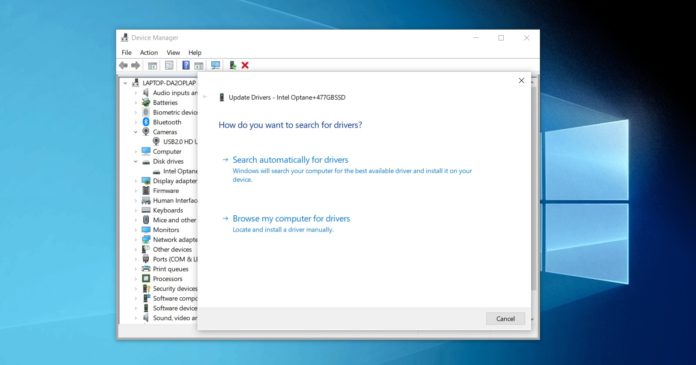 Microsoft allows users to download, install or update drivers on Windows 10 in multiple ways. You can update a device driver manually, including using Device Manager, Windows Update, and tools from device manufacturers.

Updating drivers via Windows Update can take some time until manufacturers publish newer driver packages. In addition, the update process could also fail or get stuck in the installation screen.

Starting with Windows 10 version 2004 (Build 19041.423), Microsoft has quietly disabled the option to update drivers in Device Manager over the internet.

The first option in Device Manager will only install the updated driver if you already have pre-downloaded the package and it is on your computer’s hard drive. Windows 10 Build 19041.423 also blocks the Device Manager from connecting to Microsoft servers or the internet.

When you select the first option, the Device Manager wizard will detect and install the new driver on your computer if the update package on your hard drive is accessible to the tool.

This means that whoever wants to easily and automatically update drivers in Windows 10 from Microsoft servers must use the Settings app, as the Device Manager no longer allows you to update the drivers over the internet.

With Windows 10 feature update, Microsoft has also restored the optional update listings in the Settings app. The new “view optional updates” link on the Windows Update settings leads directly to a page where you can manage the driver updates. On this screen, each driver is listed with the manufacturer name, classification and version number.

For the majority of the users, this change to the Device Manager shouldn’t be a problem.

It is all part of Microsoft’s plan to streamline the update experience on Windows 10 and it’s also not a secret that Microsoft is slowly reducing the dependence on legacy tools.