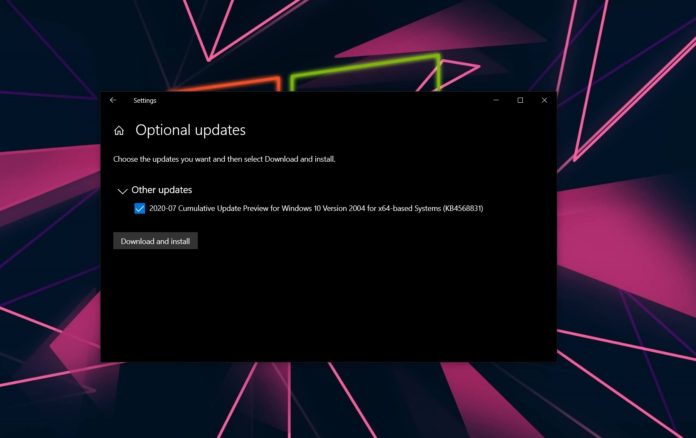 On the last day of July 2020, Windows 10 version 2004 has received another round of patching. As usual, Microsoft has also published the direct download links for Windows 10 KB4568831 offline installers, which should allow you to quickly update the systems.

KB4568831 is an optional preview update for May 2020 Update and it bumps the system to Windows 10 Build 19041.423. Unlike the Patch Tuesday update, which was released on July 14, this optional update comes with a long list of bug fixes and improvements.

This fresh optional update is being rolled out to Windows 10 May 2020 Update (version 2004) and you need to install it manually from Update & Security > Windows Update > Optional Updates.

In some installations, Windows 10 Build 19041.423 will appear when you click on a new link called ‘View optional updates’. In the optional updates page, you need to click on ‘Other updates’ to expand the section and select the update that you want to download, and click on ‘Download and install’ option.

With this optional update for Windows 10 version 2004, Microsoft is implementing fixes for a number of bugs, including issues affecting File Explorer.

In Windows 10 Build 19041.423, another problem has been resolved where File Explorer is unable to render a preview of .msg files when Outlook is installed.

Unfortunately, Microsoft is not restoring the option to remove previous search items from the File Explorer search bar with today’s update.

Microsoft is also addressing problems with Microsoft Word and Excel. The company has fixed an issue with pasting images and text from Word into Internet Explorer and another bug where Excel might stop working when you use Windows’ built-in Magnifier tool.

For consumers, Microsoft is finally fixing an issue that might display 4K (HDR) content darker when you use non-HDR systems for HDR streaming. Another issue has been fixed where the Settings page will close unexpectedly and prevent users from configuring default apps.

Windows 10 has finally received additional fixes for major printer issues which were caused by Microsoft’s June 2020 batch of security patches.

The printing bug, which was shipped accidentally with June 2020 patch, proved troublesome for printers including Ricoh models and also Brother. The additional fixes included in this patch should improve the connectivity between printers and Windows.

Build 19041.423 for Windows 10 also addresses an issue that causes Blue Screen of Death when the system resumes from sleep and connects to Bluetooth headsets. In addition, Windows 10 optional patch resolves an issue that prevents internet connectivity on some cellular modems and family safety features ARM64 devices.

If you don’t install this patch today, all the fixes and improvements will apply to your system when you install August 14 Patch Tuesday update.