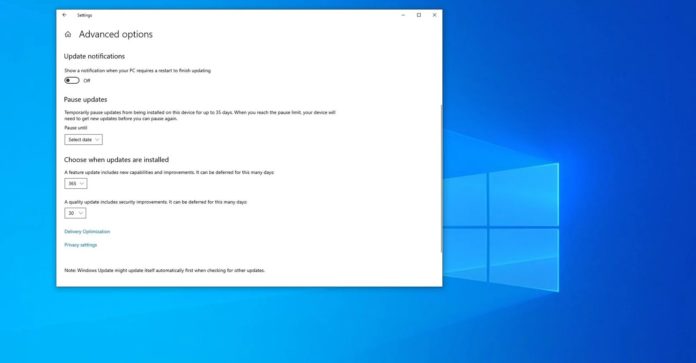 On Windows 10, quality updates download and install automatically as soon as they’re ready. On the other hand, feature updates are automatically downloaded only when your Windows 10 version is reaching the end of the support period.

Starting with Windows 10 version 2004, Microsoft says it has overhauled the Windows 10 update system and revoked update deferral feature in the Settings app, which allowed consumers and businesses to defer feature updates for up to 365 days.

This was quietly announced by Microsoft with a change in its documentation for power users and IT pros on June 23. Windows 10 May 2020 Update or newer will no longer allow users and businesses to defer Windows 10 feature update downloads from the Settings in a bid to “prevent confusion”.

Microsoft noted that update deferral can still be configured by advanced users via Group Policy editor.

While the deferral option has been removed from the Settings app, Microsoft has quietly announced a new policy that you can use to manage the features updates on Windows.

The trick works until the selected version of Windows 10 remains supported by Microsoft.

The ‘TargetReleaseVersionInfo’ entry in Registry will also allow users to disable feature update downloads for up to 365 days. If you would prefer to run a specific version of Windows 10 until the version is supported, you can follow these steps to alter Registry:

You can also enable the feature by using an elevated PowerShell prompt. To defer updates using PowerShell, run the following command in the given format:

As you can see in the screenshot below, can put any of the recent Windows version numbers in place of 1903, such as version 1909 or 2004.

In other words, TargetReleaseVersionInfo is a feature update chooser, which is a step in the right direction.