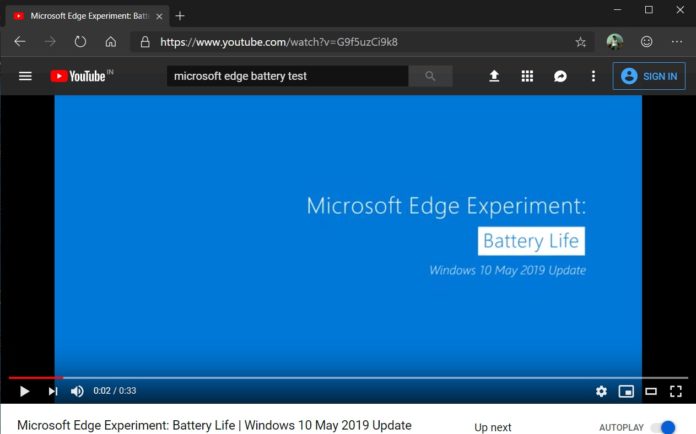 Google Chrome is a fast and feature-rich browser, but it’s a notorious battery and resources hog that can reduce your Windows device’s performance. It seems that Microsoft has an idea in mind now that could improve battery life when streaming media content in Chromium-based browsers on Windows 10.

According to a month old commit that we spotted, Microsoft plans to reduce Chrome’s battery consumption by avoiding unnecessary ‘Media Caching’. According to bug post filed by Microsoft engineer, media content is currently added to the general HTTP cache during acquisition and playback.

This behaviour negatively affects the battery life as it keeps the disk active which increases power consumption. Another downside is that it can prevent certain lower-power modes from being engaged in the operation system.

Microsoft’s proposal is to prevent streaming media content from being cached to disk where possible. The implementation of this change could improve battery backup of Windows laptops when running Chromium browsers.

In a month old Github post, Microsoft says its implementation will not only reduce power consumption during media playback but also reduce the impact on functions that may rely on disk caching. For instance, you’ll notice seek time performance improvements when forwarding or rewinding a video clip by a second.

The following flag will be added to Chromium when the feature is approved:

Turn off caching of streaming media to disk – Reduces disk activity during media playback, which can result in power savings.

A local Microsoft study showed a 62mW improvement and disk write activity also decreased by 309KB/sec. Microsoft also revealed that these changes will offer a ‘net positive result’ and reduce power consumption for ‘mainline scenarios’. The company conducted this test by streaming 1080p media content on a laptop disconnected from power.