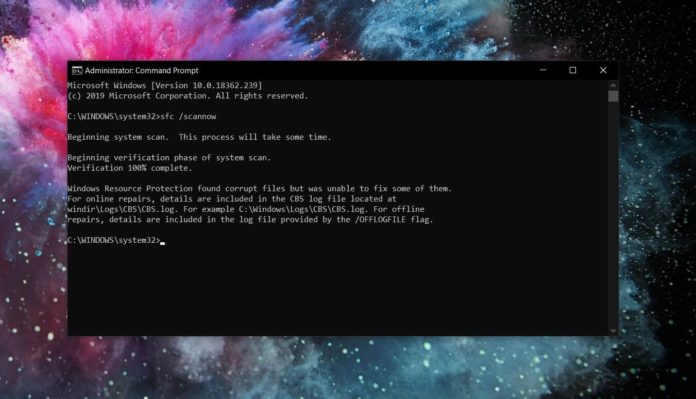 After the latest updates, if you initiate a scan in any supported version of Windows 10 with the Windows System File Checker (sfc /scannow cmd command), the process would fail  with the following error:

Checking the CBS log file reveals that the problem is linked to Windows Defender PowerShell Module. The log file also states error message “Hashes for file member do not match.”

Today, Microsoft has acknowledged this problem in a new support document. In the support document, Microsoft stated that sfc /scannow feature is not broken and there is a bug that causes System File Checker (SFC) to incorrectly flag Windows Defender PowerShell module files as corrupt.

Microsoft says the bug affects almost all versions of Windows 10, including the May 2019 Update and Windows 10 version 1607.

The files for the Windows Defender PowerShell module that are located in %windir%\System32\WindowsPowerShell\v1.0\Modules\Defender ship as part of the Windows image. These files are catalog-signed. However, the manageability component of Windows Defender has a new out-of-band update channel. This channel replaces the original files with updated versions that are signed by using a Microsoft certificate that the Windows operating system trusts. Because of this change, SFC flags the updated files as “Hashes for file member do not match.”

Microsoft says it is working on a fix and SFC will stop flagging the files incorrectly in a new future version of Windows.

Users are advised to ignore the SFC error messages as the files are incorrectly marked as corrupt.