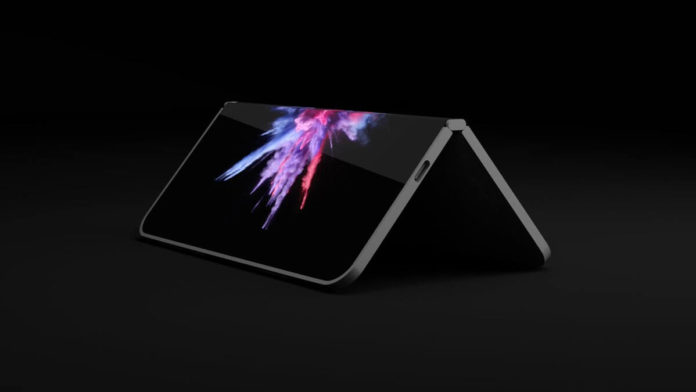 A number of Microsoft patents have shown off the foldable phone and PC designs from the company. Today, yet another Microsoft’s foldable device patent has emerged online and unlike other patents, the latest one is all about the single or multiple GUI-based display modes.

Spotted by us, the patent titled “SELECTIVELY DISPLAYABLE MULTIPLE DISPLAY MODE FOR A GUI” was filed by Redmond-based Microsoft in 2018 and published by USPTO on July 11, 2019.

In the background of Microsoft’s patent, they wrote that computing devices with multiple displays can render programs and media contents across a broader display area (both of the displays). However, the device may fail to maintain the quality of the content when it is unfolded and it could result in a discontinuous appearance.

Microsoft says apps may lack awareness of text breaks and other features of how the program is displayed on a dual-screen device. Another example is broken toolbars or panels in apps such as image editor or video editor. Similarly, gaming is also difficult as the seam between the displays may obscure or break up relevant content, resulting in a deterioration of the gaming experience.

Microsoft’s patent application proposes a new method to address the above quality issues on a dual-screen device:

“While the hinged mobile computing device is depicted with the primary and secondary displays in a side-by-side orientation, it will be appreciated that other suitable arrangements, such as a top-to-bottom orientation, may be used to display the GUI in the multiple display mode,” the patent description reads.