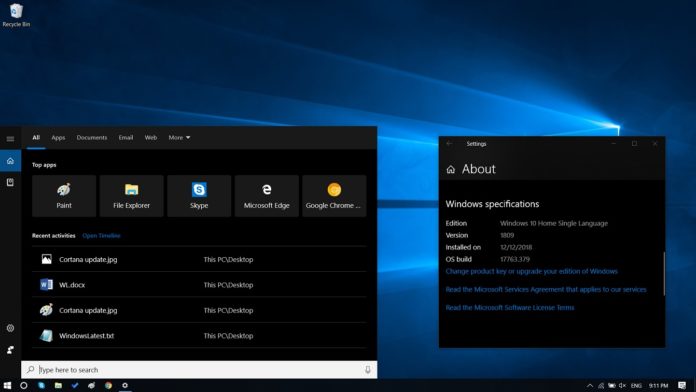 The second June 2019 cumulative update is now rolling out to Windows 10 version 1809 with a long list of fixes. As always, you can also download Windows 10 KB4501371 offline installers and update your PC manually.

Windows 10 KB4501371 brings up Build 17763.592 and Microsoft has actually fixed tons of problems with today’s update, including issues with Bluetooth connection and old Edge.

If you are on October 2018 Update, you can head to the Settings app and download Windows 10 Build 17763.592. You can also update your system by downloading the offline installer from Microsoft Update Catalog. It’s worth noting Microsoft is not pushing out any new patch for Windows 10 May 2019 Update (version 1903) today.

Microsoft is fixing an issue that prevented Edge browser from launching when the user selected a link within an app. Another bug where the Your Phone app failed to connect to the internet has been fixed. As per the changelog, problems with Your Phone app connection were experienced with web proxy server on some PCs.

Today’s patch also includes a fix for a bug where the device failed to respond on systems with East Asian locale.

A bug that may have affected mouse performance has been fixed. Microsoft says that some users may have experienced an issue that produced an extra mouse move event and this has been resolved in the latest release.

Windows Media Player crashing issues have been also addressed in this release.

Last week, Microsoft acknowledged a Bluetooth bug in May 2019 cumulative updates for Windows 10 version 1809, adding that the update disabled Bluetooth functionality on some PCs.

Microsoft says that the May 2019 patch cause issues with Bluetooth devices on October 2018 and some users may not be able to pair a connection successfully.