Years later after cancelling the dual-screen Courier device, Microsoft is said to be working on a new lineup of foldable mobile devices. Multiple patents have been spotted on the internet and all implies that Microsoft hasn’t totally given up on the idea of dual-screen devices.

Today, we have discovered a new patent application from the Redmond giant and it shows off a flexible stylus attached to a foldable device.

A new patent application titled ‘FLEXIBLE CARPENTER’S STYLUS WITH DOCKABLE EARPIECE’ was filed by Microsoft in 2017 and published by USPTO on June 13, 2019.

Unlike other patents, this one features a folding device and a stylus having a capacitive stylus nib and an earpiece dock. An earpiece is removably dockable at the earpiece dock. The earpiece includes a speaker, an earpiece battery, and a wireless radio configured to communicatively couple with a host device.

The computer peripheral further includes a charger configured to receive power, and while the earpiece is docked, to use the power to charge the earpiece battery. 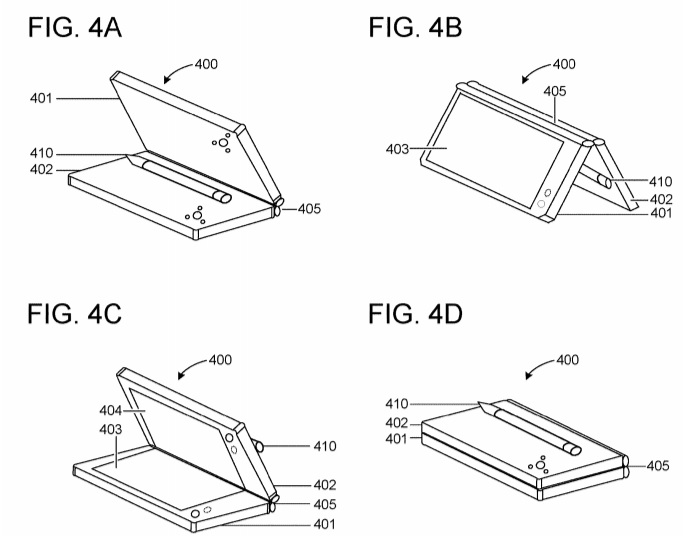 The above figure shows a dual-screen device with a hinge. In another example, the patent shows the same device rotated into a tent pose in which both displays are visible to a user. In all figures, the device has a flexible stylus to the back the housing.

This could be Microsoft’s vision of stylus use case on a foldable Windows 10 device.