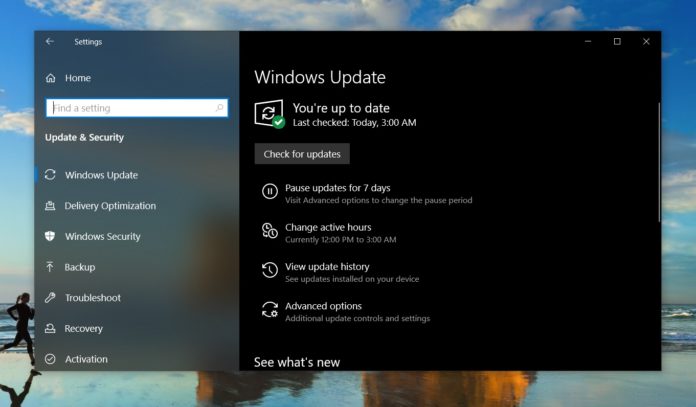 The first cumulative update for Windows 10 May 2019 Update (version 1903) is rolling out with a long list of bug fixes. Direct download links for Windows 10 KB4497935 offline installers are also available on Microsoft Update Catalog.

The cumulative update advances Windows 10 May 2019 Update to Build 18362.145 and version number apparently remains unchanged. If you’ve installed Windows 10 version 1903, open the settings app and check for updates to start downloading the May 29, 2019, cumulative update.

If you plan to install the update manually through Microsoft Update Catalog, make sure the device is on Windows 10 version 1903. To check the build number and version of Windows 10, head to Settings > System > About.

Microsoft is fixing a bug that prevented certain apps from launching when you set folder redirection for the Roaming AppData folder to a network. In Windows 10 May 2019 Update, users experienced Night light problems and today’s cumulative update finally fixes the bug that blocked some users from disabling night light mode during display mode changes.

The update also addresses a glitch associated with the game bar. In the changelog, Microsoft says that a bug caused rendering problems in full-screen games when the Game bar was visible on the top of the game.

Microsoft has included a fix for an issue that blocked users from uninstalling some Bluetooth peripheral devices.

Build 18362.145 has addressed another May 2019 Update glitch where some apps and games with Direct3D couldn’t launch in full-screen mode when the display orientation has been changed.

In a support document dated May 2019, Microsoft announced that Windows 10 May 2019 Update won’t show up if the users have any external storage attached to their computer.

Microsoft blocked the installation of the update when a Windows 10 device has an external USB storage device or SD card plugged in. Microsoft placed this upgrade block because the company discovered a bug where the drive letters will be inappropriately reassigned during the installation.

With today’s cumulative release, Microsoft has finally fixed this bug and more users can now install May 2019 Update.

Windows 10 May 2019 Update’s best feature Sandbox is still broken for some users. Microsoft has confirmed that the recent update has left Windows Sandbox feature unable to launch for many users.

The Sandbox may fail to launch with error 0x80070002 on devices with multiple language packs installed. Microsoft is aware of the problem and the fix will be included in June 2019 cumulative update.