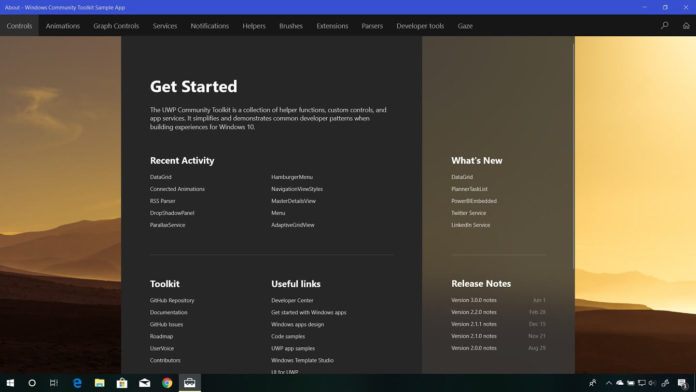 Windows Community Toolkit Sample App is a one-stop shop for Windows 10 developers to get the latest and greatest functions, controls and services for their apps. The app has been out there for a while now and has been massively popular among Windows developers as well as the enthusiast crowd. However, there was this one thing that it always lacked – dark mode!

Today, Microsoft started rolling out an update to the Windows Community Toolkit that bumped up the version to 4.0.3. With all the other enhancements, this update also brings Dark Mode to the app.

Users have lately been demanding for dark-mode everywhere within the apps that they use. With nicer aesthetics, dark-mode also has its practical benefits with being less eye-straining while using at night or in any dark environment. Professional productivity apps like Adobe Photoshop, Illustrator has had dark-mode for ages now due to overnight usage by its users.

It looks like the silicon valley is finally listening to its users. Microsoft is testing dark-mode in file explorer in Windows 10 Redstone 5 which is due this fall. Google has already rolled out dark-mode in YouTube. Even Apple is testing system-wide dark-mode in MacOS Mojave.

Although, Windows 10 already had a system-wide switch to dark-mode but it was (and still is) very inconsistent with some parts of the OS remaining unchanged. Even some of the UWP apps never switched to dark-mode with Windows Community Toolkit Sample App being among them.

Nevertheless, it’s good to see Windows Community Toolkit finally catching up with this trend and will surely impress its users.

Users everywhere have different tastes and expectations but dark themes have become surprisingly popular these days. The majority of software makers such as Apple and Microsoft have already launched them for most of their apps.

Microsoft has launched dark visual for a number of pre-installed Windows 10 core apps including the Settings app and it’s also coming to the File Explorer later this year. A dark mode in all apps and tools is among the top feature requests from Windows 10 users, and Microsoft is fully aware of this.