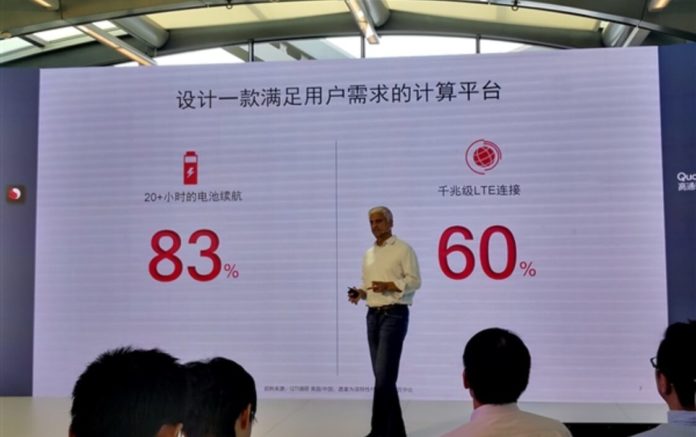 Qualcomm is betting big on Always Connected PCs which aims to deliver longer battery life even with full Windows 10 operating system. Qualcomm earlier this month announced Snapdragon 850, a new processor that will be used exclusively on devices powered by Windows 10 ARM, and the chip should offer 20 percent better battery life than the predecessor.

The existence of Qualcomm’s Always Connected PCs project is a living proof that consumers want lots of battery life from their notebooks, and both Qualcomm and Microsoft are trying to fix it.

The first generation Always Connected PCs with Snapdragon 835 processor offered longer battery life than the current lineup of the laptop, and the chip that was originally installed on high-end phones like the Samsung Galaxy S8.

During a conference held in Beijing on June 21, Qualcomm revealed that they conducted a survey to seek feedback from users. Qualcomm says that the 83% users want more than 20 hours of battery life from their notebooks, and 60% of users would like to have high-speed 4G LTE mobile connectivity.

Qualcomm at the same event also discussed the Snapdragon 850 processor.

Snapdragon 850 was announced at Computex with better performance

At its keynote presentation at Computex 2018, Qualcomm announced the Snapdragon 850, and the chipset is designed exclusively for PCs powered by Microsoft’s Windows 10 operating system, and the clock speed is almost 3Ghz.

Qualcomm says that the processor has been optimized for use with Windows PCs.

Qualcomm’s Snapdragon 850-powered devices would hit the market last year. The chipset offers better performance over Snapdragon 835 devices, and performance has been improved by as much as 30 percent.