A couple of days ago, Microsoft released Windows 10 Build 17692 to the Windows Insiders enrolled in the Fast and Skip Ahead ring, with SwiftKey and other improvements. The most recent build released earlier this week brings more Fluent Design changes, and it’s likely that Microsoft will ship the Windows 10 Redstone 5 with these changes later this year.

It appears that the Fluent Design effect is finally spreading to context menu and flyouts. In release notes published, Microsoft explains that when you will right-click open apps in Task View, you will notice new acrylic backgrounds.

“With Build 17692 you will notice new acrylic backgrounds in places on the system using these controls – for example when you right-click open apps in Task View. Apps using the SDK for this build or higher will see this change by default as well,” Microsoft explained in a changelog. 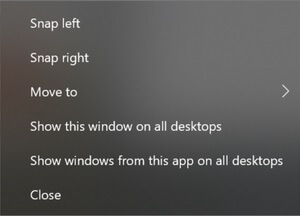 If you like consistency in the OS, you would love the fact that acrylic is now being implemented beyond key Windows 10 apps, and the smaller refinements are being worked on that would improve the interface of the OS.

There still are things to refine, and the change does align with what Microsoft plans to do in Windows 10. The changes are based on feedback, and needless to say, this is an approach that Microsoft appears to be following these days.

Fluent Design is Microsoft’s new design language that’s being implemented in Windows 10 and core OS apps. With Fluent Design, Microsoft will eventually revamp the interface and experience of Windows 10, bringing a new look to the installed apps so that it feels more modern.

Microsoft is gradually bringing this Fluent Design makeover to its operating system, the next major update for Windows 10, codenamed Redstone 5 will bring more cosmetic improvements for both the OS and apps.

Microsoft is expected to release Windows 10 Redstone 5 update later this year, and you can try it before everyone else by joining the Windows Insider program.