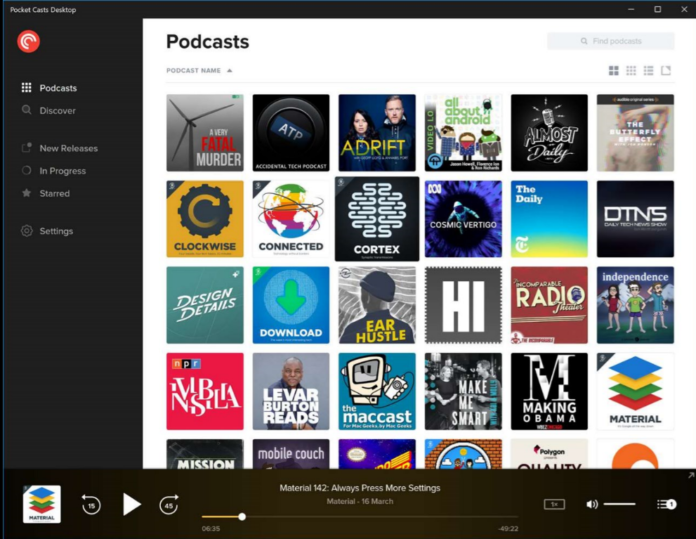 Pocket Casts, probably one of the world’s most powerful podcast player has now arrived at the Microsoft Store on Windows 10. The developers of the app Shift Jelly have announced this news on their twitter handle and mentioned that app is currently in beta and it is recommended only for existing beta testers of their web app as it is a paid only service with an initial trial period of 14 days.

A little birdie told us that more than half of our web users run Windows 10. Today we have a little surprise for you:https://t.co/oMGQMywZId

It’s a companion app for the web beta. It’s still rolling out to some regions, so don’t panic if that link doesn’t work immediately.

Pocket Casts allows users to listen to latest podcasts from their favorites. The Pocket Casts app is available for Android and iOS platforms along with a full-featured web version. It has over 200,000 podcasts available and along with that users also get to see some interesting podcasts based on machine learning from what’s trending and your location. Users can also sync their subscriptions, playback, and filters backup of their app data to the cloud and that will help you to play them across devices anytime and anywhere.

The Pocket Casts service is up for grabs at a one time fee of $9.00 USD that can be paid from the web version of Pocket Casts and then only you can continue to enjoy the cross platforms features offered by them on this app. The app has received 5-star ratings on Microsoft Store by 81% of the users which is enough to signify the quality of the first version of the app. It will be definitely be added with new features and those which are currently available on other platform apps.

Please note that this Windows 10 App in Microsoft Store is an extension of the web version of the service and you will need to pay even if you have paid for the Android or iOS version but you can still use the syncing feature available with Android app purchase. You can download the app from Windows Store here.