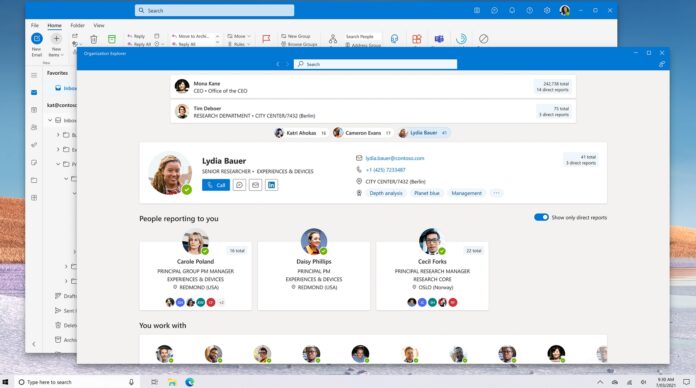 Microsoft is slowly updating existing apps with a refreshed look for Windows 11. In addition to Paint, Notepad, Snipping Tool, and other apps, Microsoft is also working on a new email client under the Outlook brand. The project is codenamed ‘Project Monarch’ and it aims to build a cross-platform email experience for everyone.

This new Outlook could be promoted as a reboot of the Mail & Calendar app. There are many ways to launch Outlook on Windows, which is why Microsoft thinks it’s time for a truly universal email client.

Right now, Windows 10 and Windows 11 versions come pre-installed with an app called Mail & Calendar. The Mail & Calendar app is based on the company’s Fluent Design and UWP principles, and it comes with a design that’s reminiscent of the Windows 10 user interface.

Mail & Calendar app has its own limitations and a lot of users prefer the original Outlook desktop app or even web app over Mail UWP. With the new Outlook app, Microsoft wants to consolidate the Outlook apps into one unified application that can manage your mail across all supported desktop platforms.

First look at the new Outlook app for Windows

Microsoft is planning to launch the first public preview of the One Outlook app in late March or April before expanding it to other Insider channels in the summer. At the moment, general availability is planned for fall 2022 and we’re expecting the app to come pre-installed with Windows 11 22H2.

According to references founded on Microsoft’s website, One Outlook will be available for Windows, macOS, and on the web. Initially, it will be offered on Windows 11 or Windows 10 only, but it won’t replace the Mail and Calendar app anytime soon. Instead of forcing users to migrate to new Outlook, both apps will remain available on Windows 11 side-by-side.

At some point in future, we’re expecting new Outlook to replace all Outlook apps on Windows 10 and Windows 11. It’s not yet clear when that might happen.

Thanks to another support document, we know that the interface of the new Outlook will be similar to Outlook web. As you can see in the above screenshot, the web-based Outlook app will have rounded corners and icons inside it will also have rounded edges to give it a more modern look.

Like the rest of the web apps, One Outlook will also support Windows 11’s Start Menu, Taskbar, notification and other features.

Microsoft will confirm the rumoured details sometime this spring, possibly around the Build 2022 developer conference, as per media reports.