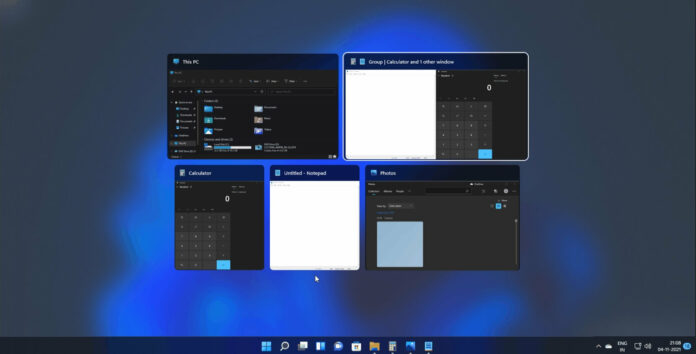 Windows 10 or Windows 11’s window management has always been better than macOS and Microsoft is now rolling out a new update that will change the look of Alt+Tab (default shortcut to quickly switch between apps and open browser tabs).

As you’re probably aware, Windows 11’s new “Task Switcher” allows you to quickly switch between open apps with the Alt+Tab keyboard shortcut. This feature has always been a part of all new versions of Windows, including Windows 8 and Windows 10.

Unlike Windows 10, the Alt+Tab default interface uses the full screen. Right now, if you press Alt+Tab in Windows 11 Build 22000, app previews will appear in full-screen mode with blurred background. On Windows 10, Alt+Tab uses a windowed interface without the unusual full screen.

This is going to change in Sun Valley 2, which would be the first major update for the operating system. Starting with Windows 11 Build 22526, Microsoft has started showing ALT + TAB as windowed instead of full screen.

As you can see in the below screenshot, the new Alt + Tab UI no longer uses the full screen and it sticks with a Windows 10-windowed mode. The Alt + Tab experience now looks better on desktop, with the blur effect now available around the windows.

As you can see in the above screenshot, instead of full-screen previews, a row of app thumbnails will now appear in the center of your screen and some people find it similar to macOS smaller previews.

It is also worth noting that the functionality of Alt-Tab remains unchanged. If you hold the Tab or Alt key down, Windows will still move between the app from left to right and vice versa.

This new Alt+Tab experience is available for a limited number of Windows 11 testers in the Windows Insider program. Most of the users may not see the new Alt + Tab UI that uses windowed mode for app previews instead of the full screen.

Microsoft has confirmed that the new Alt + Tab UI is still a work-in-progress. If everything goes according to the internal schedule, this new design should ship with the first Windows 11 feature update later this year.

Update: This article has been updated and Microsoft’s proposed change should be more clear now. We’re sorry for the error.