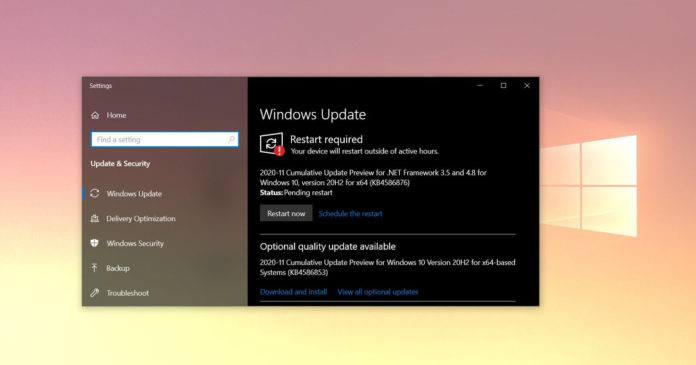 Microsoft is resuming the rollout of optional updates with the release of Windows 10’s January 21 update, which is now rolling out to version 1909. The tech giant has also published the direct download links for Windows 10 KB4598298 offline installers.

Windows 10 KB4598298 is an optional update and it will not download or install automatically. This update can be applied to Windows 10 version 1909 only, but the changes included in this update will be released to those running version 20H2 / version 2004 later this month.

If your device is compatible with the update, you’ll see the following patch:

Remember that this is an optional update and it can always be skipped. The fixes included in the optional patch will be delivered to everyone via the mandatory February Patch Tuesday updates.

If you’re unable to apply the patch to Windows 10 version 1909, you can always grab the offline installer from the Microsoft Update Catalog.

Microsoft has fixed an issue where Windows 10 generates a weird error message titled ” “The directory name is invalid.” According to the changelog, the problem was experienced when users attempted to open a document pinned to the desktop as a shortcut.

Another bug has been fixed where Windows is unable to extract files when you right-click an online-only ZIP file.

Microsoft is also improving existing features in the operating system. For example, an issue has been resolved where users are greeted with a blank screen after their device resumes from the hibernation state.

Another noticeable change is a new feature for the Windows Update page that will notify you when your device is reaching the end of service (EOS) status. As you may be aware, Microsoft is planning to end support for Windows 10 version 1909 and forcefully upgrade older devices to version 2004.

Windows 10 Build 18363.1350 will also change the way DirectX 12 runtime components are loaded on Windows. As part of the patch, Microsoft is splitting the d3d12.dll binary into two pieces, which enables faster updates for these components.