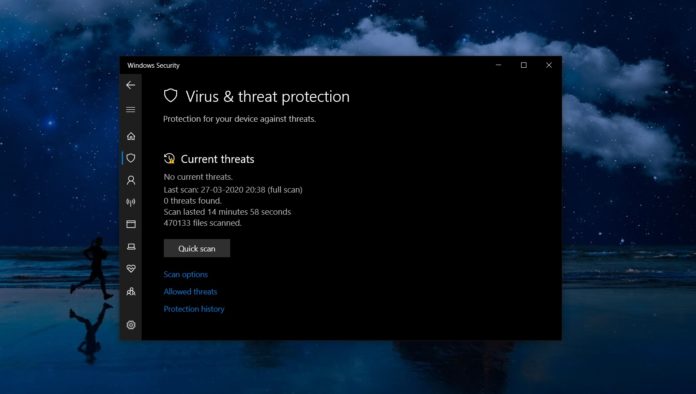 It looks like Microsoft broke Windows Defender on Windows 10 for the second time in this year. Windows Defender update, which was shipped earlier today, is causing ‘Threat service has stopped. Restart now’ error and ‘Unexpected error. Sorry, we ran into a problem. Please try again.’

While many users are blaming Windows 10 KB4549951 for Windows Defender debacle, the real culprit appears to be Security Intelligence 1.313.1638.0, which was pushed earlier today via an automatic Windows Update.

According to various posts in forums and social media platforms, and emails that we received from users, Windows Defender is failing with the following errors:

The bug prevents users from running Windows Defender scans and failed scans could expose Windows 10 customers to security risks and bugs like this could also erode trust in Windows Defender.

“Same here, checking Event Viewer – Applications and Services Logs – Microsoft – Windows – Windows Defender – Operational showed that Windows Defender Service crashes when it scans a folder with a file that has more than one period before extension,” a user reported.

“It happened this morning. Yesterday was fine. I tried everything, nothing worked. It seems to be a Windows glitch that needs to be fixed asap. It starts scanning and breaks in the middle of the scanning process around about 1/3 of the entire process,” another user said. 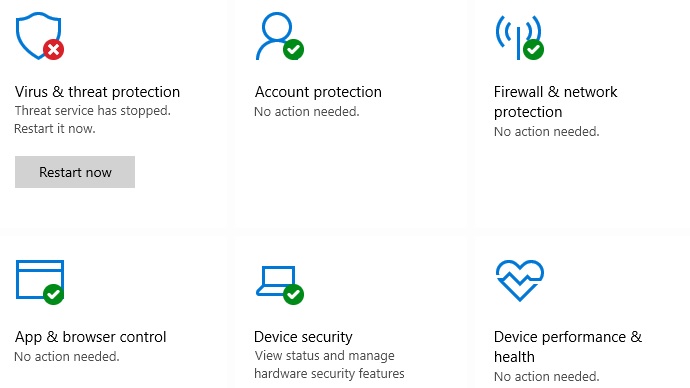 So what is this issue, exactly? It appears that Microsoft released a botched Windows Security intelligence update version 1.313.1638.0 in the early morning and it triggers unforeseen repercussions, causing Microsoft’s built-in antivirus solution to display ‘Threat service has stopped. Restart now’ error on its homepage.

Both Full and Quick virus scans don’t work properly, with Windows Defender ‘freezing’ or ‘crashing’ during the scanning.

How to fix ‘Threat service has stopped. Restart now’ in Windows Defender

It appears that the problem is caused by files with two dots (..) in their name and the error will disappear if you rename or delete the files.

Look there for error and you’ll find something like “crash exception code 0xc00000005 ” and it includes the name of the file with two dots. To resolve the issue, remove the extra dot or delete the file.

Once you’ve fixed the file, go to services and start Windows Defender and perform a quick scan. This should resolve the problem.

In a chat with Microsoft’s support team, one staff member told us that Microsoft is aware of the ongoing issue.

Microsoft could soon deliver the fix with another ‘Security Intelligence Update for Windows Defender Antivirus’, so you need to make sure you’ve not disabled Windows Updates.