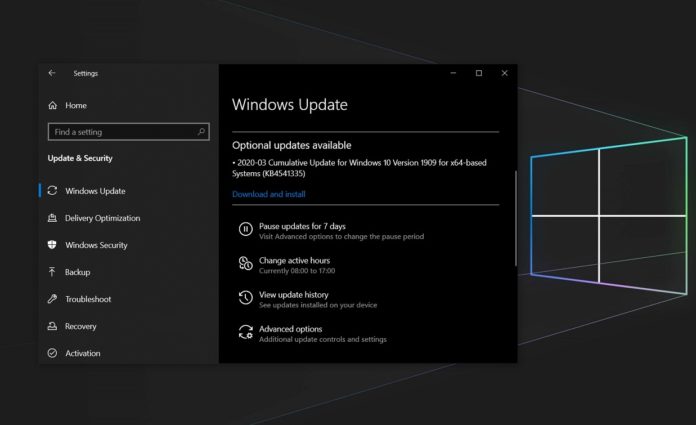 Windows 10 updates which are released on second Tuesday are downloaded and installed in the background automatically. However, optional updates released in the third or fourth weeks are not installed automatically unless you check for updates and manually trigger the install process.

It is worth noting that Windows 10 Build 18363.752 download size is more than 400MB and all the fixes included in this patch will be released to consumers with April’s Patch Tuesday update. The update is currently listed as available in Windows Update and you have to click ‘Download And Install’ button to kick off the installation.

This optional Windows 10 cumulative update comes with a long list of improvements and fixes. For instance, Microsoft says it has addressed an issue where misleading error message for UWP apps would appear if they were converted from the Win32 platform.

For those who stream videos, Microsoft is making a change that should address performance issues in apps such as Netflix where content is protected by digital rights management (DRM).

File Explorer is also being updated with a fix for a bug causing the file manager to crash when using roaming profiles. Another issue where Start menu’s search box fails to return results on PCs that have no local profile has been fixed.

Recently, some users had reported that Your Phone mutes audio from working on certain devices. With today’s optional update, Microsoft has deployed a fix for a bug that prevents the mute button from working if Your Phone app is installed.

Today, Microsoft confirmed that optional updates, referred to as C and D updates, won’t be released from May. This applies to all supported versions of Windows 10 client and non-security updates won’t be released due to the health issues across the globe.

Microsoft says Windows 10 Patch Tuesday updates will still happen as the company plans to prioritize security improvements during the pandemic.

Because of the pandemic, a lot of people are relying on Windows for daily tasks and this move should help the users.