Microsoft is expected to begin the rollout of Windows 10 November 2019 Update (version 1909) on November 12 and the company has also made the RTM build available for more Insiders.

As of November 5, the latest version of November 2019 Update is Build 18363.449, but it may not be the final release candidate that would be pushed to production devices. For now, Build 18363.449 is available for testers only and we might see a newer build shipping to consumers, though the base will remain 18363.

As we’ve already learned, Windows 10 November Update will ship with a handful number of new features and improvements only. There will be plenty of bug fixes, performance improvements and battery efficiency improvements too.

On PCs with May 2019 Update, the feature update is delivered as an enablement package, which means you’ll find KB4517245 (enablement package) on Control Panel’s Windows Update page after you install the update.

The enablement package KB4517245 modifies Windows 10 version and build number to declare that November 2019 Update is installed and it takes only a few minutes to download and install the package, though a reboot is required.

In other words, Windows 10’s enablement package increments the build number and also enables the new features. It’s also worth pointing out that the About us page might still show installation date of May 2019 Update under ‘Installed on’ section, rather than November 2019 Update.

Here are some of the features you can expect to see in the Windows 10 November 2019 Update.

Windows 10 version 1909 speeds up Windows Search experience. After applying the update, Windows Search will index your PC, which means if you type a file name within File Explorer, it would bring up a list of files related to the query. 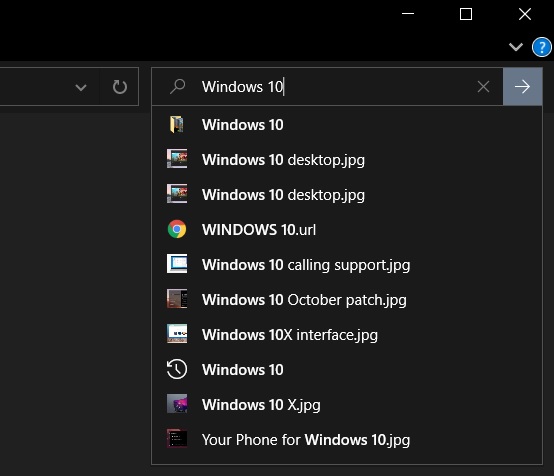 For example, if you want to search for ‘Paris’ photos and files, suggestions will begin appearing as you type ‘Par’. File Explorer’s suggestions will instantly load the files you might be looking for.

It also appears that Windows prioritizes recent searches to populate the list and Explorer’s search performance has significantly increased as a result. The searched keywords are also cached, so you will have access to the same results again when you search for the file next time.

In Windows 10 v1909, Microsoft organizes notifications by the most recent and not by sender name. This should allow you to find the app that bugs you with notifications the most, so you can disable or delay notifications for that particular app.

You will find the option in Settings > System > Notifications or you can click Manage notifications link at the top of the Action Center.

The November 2019 Update also comes with changes to CPU’s “favored cores,” which should improve performance of PCs with processors from Intel or AMD.

Intel and AMD’s modern CPUs flag the highest-performing core in the processor and November 2019 Update implements a new rotation policy to distribute work more fairly among these selected/favored cores.

This also means that thermal stress would be reduced on the core and battery efficiency of the computer will improve. It’s not entirely clear how rotation policy and favored core will work together, but processor and BIOS both should be also aware of the favored cores to boost performance.