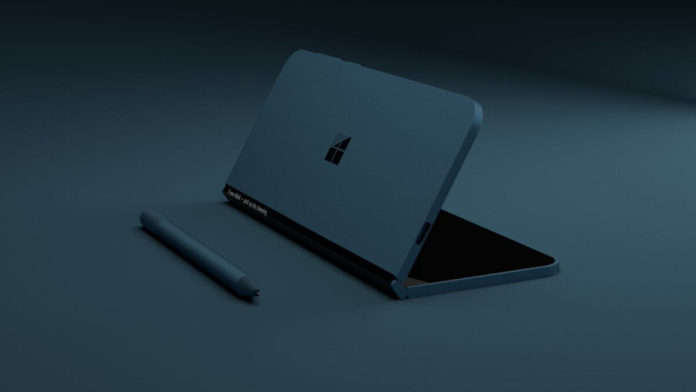 In a patent discovered by us today, Microsoft explains that one of the challenges of making foldable devices usable is the ‘deadband, border’ area. Because of the way they are implemented, the deadband and border of a device reduce the active viewability point and affects the overall user experience, especially when the device is folded.

The patent titled ‘COMPUTING DEVICE DISPLAY BONDING’ was filed by Microsoft in late January and made public by the USPTO on August 8, 2019. According to the filing, a ‘deadband’ is an inactive area or a border that do not contribute to an image area of the display and these are overhanging portions of the protective layer.

Microsoft’s solution is ‘stacked securing concepts’ that would reduce deadband and offer a new way to secure the display of the device. It will also reduce deadband or the crease when the ‘first and second displays approach one another’. This reduced deadband or border concept has been designed to improve the user experience when the UI is rendered across the active areas of both displays.

“The stacked securing mechanisms can reduce deadband compared to previous solutions, and thereby offer a relatively larger and/or more extensive active area for a display. Thus, the present implementations can provide superior display devices with narrower deadband as compared to traditional techniques,” the patent filing reads.

To ensure durability, Microsoft says it will secure the displays to the chassis with the new stacked securing mechanism.

Microsoft also noted that the display components of such a device may include a touch panel assembly (TPA), a thin film assembly (TFA), and a backlight assembly (BLA). It also sports a display protective layer and adhesive, which sounds similar to the one found on Samsung’s phone or it could be something else.