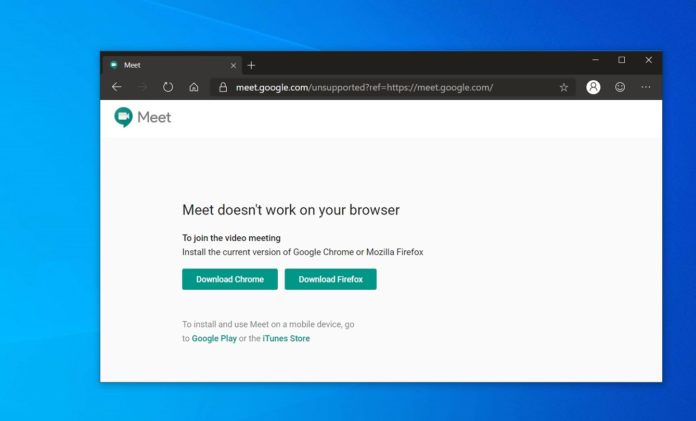 Google’s Chrome web browser has established a strong market dominance over other web browser and more and more developers are optimizing their websites for Chrome. Microsoft recently switched Edge’s backend to Chromium and many hoped this could improve overall compatibility with websites.

The preview builds of Microsoft’s Chromium-based Edge are already available for the testers, but not everything is worked as originally expected. Few users recently noticed that Google Meet, a video conferencing web app has been blocked from opening on Microsoft Edge.

Some believed that Google purposefully blocked its app on Microsoft Edge, but the search engine giant has denied the allegations.

In the past few days, users reported that Google Meet prompted to download Chrome or Firefox as the service wouldn’t work with Microsoft’s new Edge browser that also uses Chromium as its base.

In a statement, Google has denied compatibility problems were anything but accidental.

“We view the increased adoption of Chromium and WebRTC as positive for the entire Unified Communications industry,” a Google spokesperson said in a statement. “With the recent release of developer previews for Edge, we are thrilled to be able to offer a new preview experience of Hangouts Meet, and we plan to officially support it once it becomes generally available,” the company added.

As Google Chrome is the most popular browser in the market, developers are more focused on creating compatibility with the platform than other small browsers. However, Microsoft’s decision to use Chromium as the browser base is likely to reduce these problems, at least with the non-Google products.