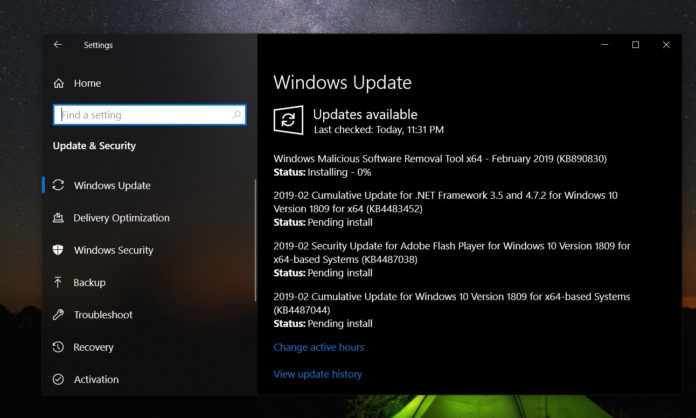 Windows 10’s February 2019 cumulative update is out and it comes with usual fixes, at it happens every month. Direct download links for Windows 10 KB4487044 are also live and you can grab the msu installers to install the patch manually on multiple PCs.

The KB4487044 advances the October 2018 Update machines to Windows 10 Build 17763.316. February 2019 patch for Windows 10 version 1809 include both security and non-security fixes, and it also comprises all the improvements released in the last few updates.

Users are recommended to install the monthly patches as it addresses the glitches and as well as the vulnerabilities that have been discovered lately. It shouldn’t take more than 30 minutes to download and install a cumulative update via built-in Windows Update, though it could be longer on a system that hasn’t been updated lately.

As highlighted above, Windows 10 Build 17763.316 comes with fixes for various issues and security vulnerabilities. For instance, issues with Microsoft Edge has been addressed.

Today’s cumulative update aimed at Windows 10 version 1809 addresses an issue where applications that use a Microsoft Jet database with the Microsoft Access 97 file format may fail to open.

The update also addresses an issue where the value of LmCompatibilityLevel won’t be set correctly on some PCs. It also includes fix for an issue that causes the Windows Hello for Business Hybrid Key Trust deployment sign-in to fail but it occurs when Windows 2019 Server domain controllers (DC) are used for authentication.

Another issue associated with HoloLens where users are accidentally allowed to bypass the lock screen sign-in process in some workflows has been addressed.

Microsoft is aware of one issue in today’s patch for Windows 10. According to the changelog, there a bug which causes Microsoft Edge to fail to load local websites.

Microsoft recently revealed that Windows 10 version 1809 is rolling out as an automatic update to compatible devices but it may not show up on some PCs if a compatible software or hardware is installed.

If you’re on October 2018 Update, you can install the patch by navigating to Settings > Update & Security > Windows Update and clicking Check for updates button.