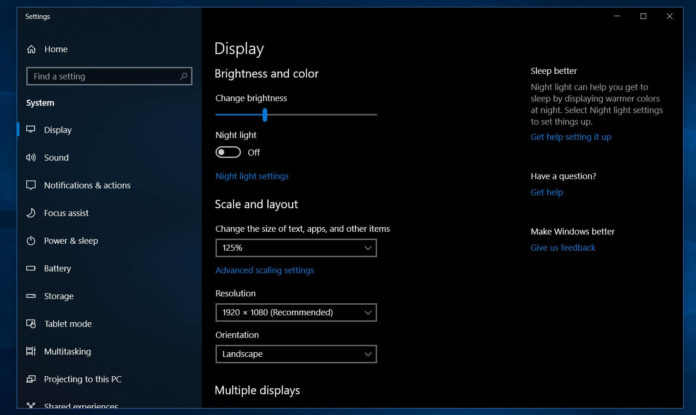 Windows 10 19H1 update is scheduled to land in the Spring of 2019 and it will introduce several new features. Apart from new features and UI changes, Microsoft is also working on minor changes that would enhance the overall user experience and address the feedback.

In some cases, the brightness settings configured by the user were ignored when switching a device (particularly a laptop) from battery power to a socket power and vice versa.

Windows 10 ignored the user-defined brightness settings and when the device was plugged into the socket for charging, the brightness was automatically increased. This behaviour could be frustrating as the brightness level changes when switching from one mode to another.

Windows 10 19H1 will include some changes to introduce a battery friendly experience. With latest Windows 10 19H1 Build 18282, Microsoft has improved the brightness settings in the operating system.

If you change the display brightness, the system will remember the new brightness level as the user’s prefered configuration whether the device is on battery mode or connected to the socket. It means that the brightness won’t change if you use the device while charging or on battery life.

It’s worth noting the battery saver mode will continue to automatically reduce the battery as it certainly makes sense to dim the display to preserve battery.

“We’ve heard your feedback about a specific case where a display can become brighter when transitioning from a battery charger to battery power. For 19H1, we’re modifying the display brightness behaviour so that this can no longer happen,” Microsoft’s Dona Sarkar confirmed in a blog post.

It’s one of the little things that can improve user experience and it’s great that Microsoft is committed to fixing all this kind of bugs.

This change will be implemented in Windows 10 with Spring 2019 update which is expected to land in Apri 2019 with several other similar improvements.

The other changes are also planned

Windows 10’s 2019 update will pack some other improvements and fixes. For example, the company is working on a new light theme, improved music flyout and as well as a new way to configure the volume mixer settings.