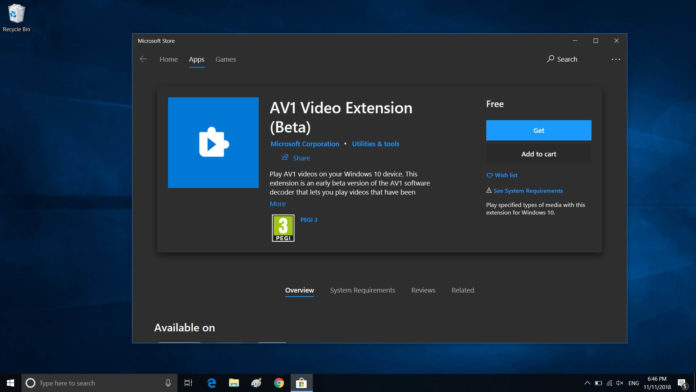 A couple of days ago, Microsoft released AV1 video codec app for Windows 10 devices. The application can be downloaded from the Microsoft Store for free.

At the moment, Windows 10 October 2018 update is not available for download but Microsoft is expected to release it re-sometime soon as the company has already addressed the reported issues.

The extension app is supposed to improve the experience of codec videos on all Windows 10 devices but since it is in the early beta stage, you may come across small performance issues while playing AV1 videos.

“Play AV1 videos on your Windows 10 device. This extension is an early beta version of the AV1 software decoder that lets you play videos that have been encoded using the AV1 video coding standard developed by the Alliance for Open Media,” the company explains.

If you install the extension released by Microsoft, you will be able to run more videos on your device. This extension will add support for all videos using AV1 codex and you would be able to run such them in Microsoft Edge, built-in Movies and TV and other Windows 10 apps.

The codec is currently available to download from the Microsoft Store and you can get it by searching for AV1 Video Extension (Beta) in Store or from here.