Microsoft today released a new update for its Office apps on Windows Desktop for both Insider (Fast) and Monthly Targeted (Insider Slow) rings. The latest update comes with new features for Microsoft Outlook and Access.

The update pushes the Microsoft Office Apps to build 10904.20005. Microsoft is adding new options to the Outlook with users now getting the ability to stop seeing reminders for past events. You can now also dismiss the ended reminders automatically in the calendar.

To enable the new option you would need to go to Outlook, click File > Options > Advanced > Reminders > select on Automatically dismiss reminders option. 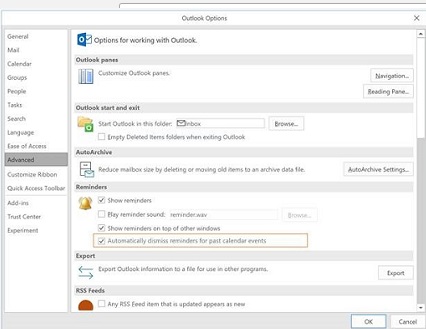 Microsoft is also making new changes to Access. This update adds support for both Black and Dark Gray themes. The two themes are available alongside the Colourful and White themes. To access the new themes, go to File > Account, click on the drop-down menu beside to Office Theme.

Windows #OfficeInsiders, the release notes for #InsiderFast build 1810 10904.20005 are now available! New features this week in Outlook and Access, as well as a host of fixes! Give them a look, and enjoy your weekends! https://t.co/6zS2DuQZEW

The Redmond Giant has also fixed issues for Word, Excel, and PowerPoint reported after the users installed the previous flights. Lock Issue with co-authoring in Word has now been fixed, with Excel and PowerPoint getting some performance and stability fixes.

Office App for Insiders in Slow Ring has been updated to Build 10827.20084. With this release, Microsoft has introduced support for @mentions which is useful for many users, particularly the professionals.

New Proofreading tools have also been introduced for Word and PowerPoint users. For example, the PowerPoint would show the grammar and writing suggestions.

Windows #OfficeInsiders, the latest #InsiderSlow build is available now! Tons of new features this month, so check out the What's New page while you update! https://t.co/UAOYnm4A09 pic.twitter.com/n9NJ3jEuzj

Along with adding Proofreading capabilities, the spelling corrections option has been also added to the app. Outlook will automatically take care of the grammatical errors in your emails and messages.

As noted above, Microsoft is rolling out these new features to the Office Insiders. Microsoft might push the same update to the general public in the coming weeks after beta testing with Insiders.