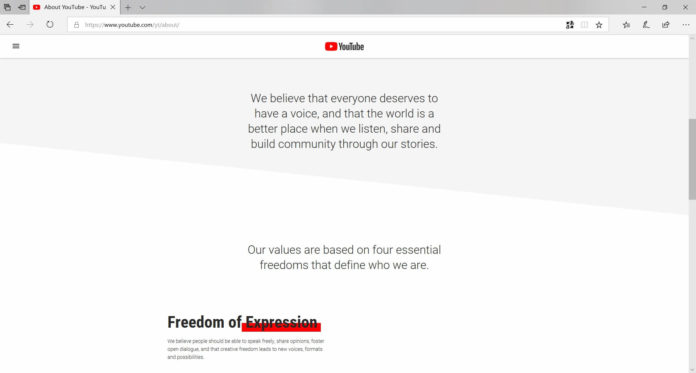 Google Chrome is undoubtedly the most popular browser across all devices. But more recently Google’s own services often ignore standards and force people to use Chrome. The best example is Google Earth that is still blocked on other web browsers such as Edge and Firefox.

It appears that YouTube also “works best with Chrome”. Google employees use Gmail and YouTube on Chrome, so it’s understandable they’d optimize for Chrome but it looks bad if the service doesn’t work properly in other web browsers such as Microsoft Edge and Mozilla Firefox.

Chris Peterson, the Program Manager who made the claim, explains that YouTube’s webpages load five times slower in Firefox and Edge compared to Chrome.

YouTube new design uses the Polymer library which is a good thing according to Google but the Mozilla Program Manager claims that Google has purposefully done this so that YouTube viewers will use Chrome web browser for better performance.

“YouTube page load is 5x slower in Firefox and Edge than in Chrome because YouTube’s Polymer redesign relies on the deprecated Shadow DOM v0 API only implemented in Chrome,” Chris explains in a tweet which has been shared by thousands of users.

YouTube page load is 5x slower in Firefox and Edge than in Chrome because YouTube's Polymer redesign relies on the deprecated Shadow DOM v0 API only implemented in Chrome. You can restore YouTube's faster pre-Polymer design with this Firefox extension: https://t.co/F5uEn3iMLR

“YouTube serves a Shadow DOM polyfill to Firefox and Edge that is, unsurprisingly, slower than Chrome’s native implementation. On my laptop, initial page load takes 5 seconds with the polyfill vs 1 without. Subsequent page navigation perf is comparable,” he added in a follow up tweet. “I assume Google has metrics showing that the Polymer redesign increases Firefox and Edge user engagement more than the slow polyfills hurt it. YouTube still serves the pre-Polymer design to IE11 by default so they could choose to serve it to Firefox and Edge too”.