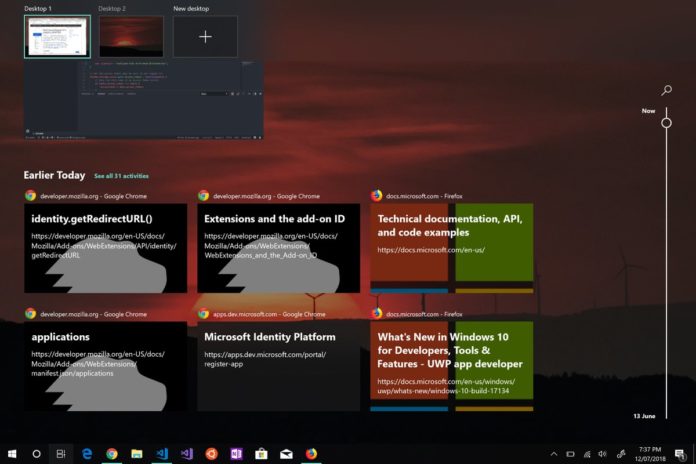 Microsoft earlier this year launched Windows 10 April 2018 Update and it comes with a new feature called Timeline that allows users to create snapshots of their activities and restore them within the next 30 days. Timeline stores snapshots of almost everything including the web history, though for now, only Microsoft Edge is supported.

Developer Dominic Maas unveiled the first implementation of this feature for Google Chrome and Mozilla Firefox. The third-party browser support has finally been developed and it works like a charm.

“I recently switched back to Google Chrome (from Microsoft Edge) on my Surface (due to lacking 1Password X support), I was looking around for an extension that would perform similar user activity syncing like Microsoft Edge. I did find one, but it was a paid Windows Store app and a free chrome extension (both required). I figured that it shouldn’t be too difficult to implement, so I created this repository,” the developer explains.

It’s not a big hack or something that the extension would only let all Google Chrome and Mozilla Firefox tabs show up in Windows 10 Timeline, and everything seems to be running quite flawlessly.

I heard y'all wanted @firefox support (thanks to https://t.co/Kn2ia9qxvR for the bug fixes). pic.twitter.com/EJWOFFnTZ1

“I found an extension for Chrome that enables Windows Timeline support, but it was a weird hybrid paid store app + free chrome extension. Decided to create my own, acts like Microsoft Edge currently,” he said on Twitter.

We’ll update this article when the download links of the extension are available.