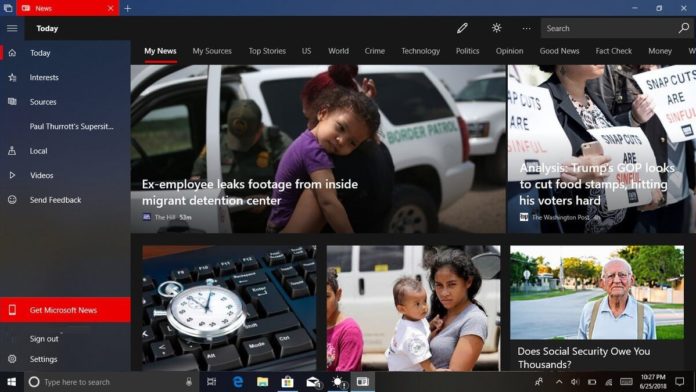 Microsoft rebranded its MSN News app to Microsoft News last month and the company also tested the redesigned app for Windows 10 with Fast Ring Insiders. Today the new rebranded app for Windows 10 is available for regular users (non-Insiders). The app update adds acrylic to the app’s sidebar and it makes the sidebar more transparent.

Aside from the Fluent Design to Microsoft News, the software giant has also added a quick shortcut to the sidebar and it lets you download the mobile app. You would need to enter the email address or phone number to receive a download link of the rebranded News app on your Android phone and iOS device.

Microsoft News isn’t a simple content aggregation, the firm says it editors  curate the top stories throughout the day. The aim of the team is deliver the latest news from best sources so the the readers get multiple sides of the story from multiple viewpoints.

“Today, there are more than 800 editors working from 50 locations around the world – including editorial newsrooms serving multiple regions in India, Germany, France, Mexico, Canada and Spain,” the company said.

Microsoft’s rebraned News app for Windows 10 is available from the Microsoft Store and the update should up on your device in the coming hours.