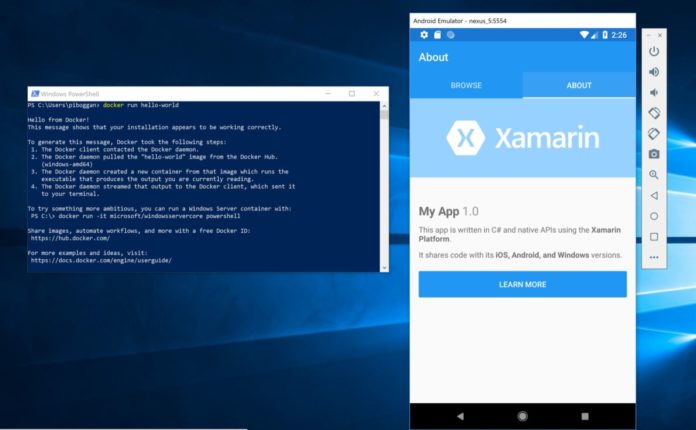 At Build 2018, Microsoft officially announced Google Android emulator preview that is compatible with the Hyper-V. However, the new preview is only available for the latest Windows 10 April 2018 update.

The new preview allows developers to use a hardware accelerated Android emulator without switching from Intel’s HAXM hypervisor. This new functionality is achieved with the help from the Xamarin team. Microsoft acquired Xamarin in February 2016 and integrated the platform with Visual Studio.

The Hyper-V Android emulator preview also allows developers to use Google’s Android emulator side-by-side with other Hyper-V based technology such as Hyper-V VMs, Docker tooling, the HoloLens emulator, and more. In other words, Android developer who also uses Hyper-V can use a fast Android emulator that will support latest Android APIs, out of the box support for Google Play Services and more.

The preview also supports almost all key features in emulator including camera, geolocation, and Quick Boot. Hyper-V was causing a lot of trouble with graphics drivers and performance of it wasn’t acceptable at all on Windows 8 / 8.1. But with this new emulator, Microsoft made a significant improvement and they assure user’s that it will deliver great performance.

Maybe this is why Project Astoria was abandoned. With Windows on ARM integrated with an efficient emulator running on Hyper-V with ARM support for the emulator. Sure it might invoke little performance issue. This would be Windows running an APK in an emulated environment.