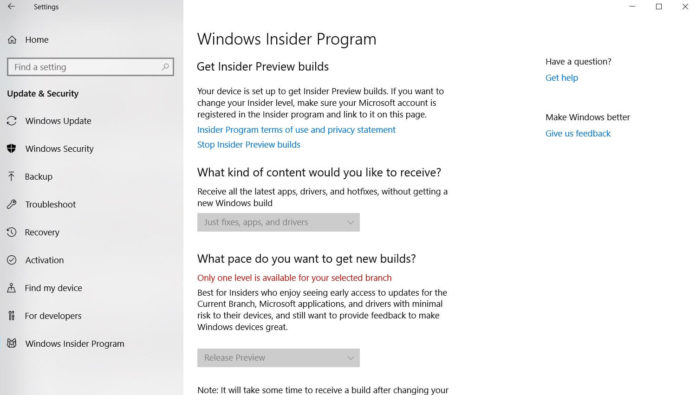 At Build 2018 developer conference, Microsoft announced a series of changes that would make its way to Slow Ring Insiders. The company is planning to increase release frequency for the Slow ring, which means that more new builds will be released for those Insiders.

Windows Insider program has four different rings – Skip Ahead, Fast, Slow and Release Preview Ring. Microsoft releases new builds to Skip Ahead when a new version of Windows 10 is in early development but the same time the company is busy with the public release of another update. For example, Microsoft pushed Redstone 5 builds to the Skip Ahead ring even before rolling out the final version of Windows 10 April 2018 Update to the general public.

In other words, the Fast ring gets build early, and the Slow ring gets more stable builds but the latter has received new updates at a rather slow pace. It appears that Microsoft wants to bring Fast and Slow rings closer together and starting with Redstone 5 update, the company would release more stable builds to Slow Ring.

At Build 2018 developer conference, Microsoft revealed that the Windows Insiders enrolled in the Slow Ring will receive the builds at a faster pace but with more refinements and stability. The approach could accelerate the development of Windows 10 updates.

Microsoft could still make small changes to the build before rolling it out to the Slow Ring. Needless to say, the approach could accelerate the development of Windows 10 as builds will be shipped to more beta testers before they are being released to production machines.

Microsoft last month released the Windows 10 April 2018 Update and software giant is now working on Redstone 5 update. The next version of Windows 10 codenamed Redstone 5 is projected to launch in the fall and preview builds are already being shipped to Insiders.