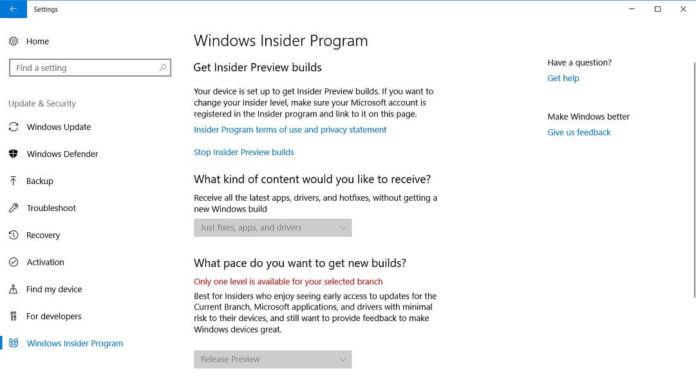 Windows 10 Build 17623 is rolling out to the Windows Insiders in the Skip Ahead Ring, and since the update is from the Redstone 5 branch, it comes with a lot of new features. Microsoft is today introducing High Efficiency Image File Format (HEIF), new GPU changes and privacy setting improvements.

Microsoft says this build is only available for the users in the Skip Ahead Ring, but it will be released to the Fast Ring Insiders shortly after launching the Windows 10 Spring Creators Update. Microsoft has already confirmed that the company will bring back all Insiders Rings in sync, but this would happen only after the public release of the Redstone 4 update.

Microsoft is today launching new Image File Format called HEIF. This is a new file format available for Windows 10 and it can be opened with Microsoft Photos app. It seems that HEIF might be a better technology than JPEF, GIF and PNG in terms of ‘quality, compression, and capabilities’ since it has modern codecs like HEVC.

The list of HEIF Image Format features doesn’t end here. The company in the blog post says that this new format of the image would support encoding of images collection and sequence, along with depth maps and HDR improvements for much better contrast. Microsoft says that the users can only view the HEIF images, and it can’t be edited in this release.

Microsoft says the users need to join the Windows App Preview Program for the Photos app in order to try this photo format, and the HEIF images can be only opened in the version 2018.18022.13740.0 of the app. The Windows 10 Spring Creators Update devices will also receive this new version of Photos app. The software giant has also released new dependencies of HEIF photo format on the Microsoft Store that would allow you to view HEIF photos as well as thumbnails in File Explorer.

Microsoft is also introducing a safe remove experience for external GPUs. The company in a blog post detailed that the GPU can be easily removed, and there would no data loss. Microsoft notes a feature will allow users to eject the GPU safely, but only if no other applications are using the external graphics memory.

The company is also releasing a new and improved Privacy setting, the new design aims to provide an improved experience and the company has also added privacy settings for Inking & Typing and Find my device. This build is available for the Windows Insiders opted into the Skip Ahead Ahead, and it will be released to the general public in October.