The Windows Camera app has been sorely missing the Panorama option since it’s inception with users needing to use either the Lumia Panorama app or third-party alternatives to use this feature on their devices. But that’s set to change soon.

According to Brandon LeBlanc, the Senior Program Manager of the Windows Insider team, the option to capture Panorama images is coming soon to the Windows Camera app.

Nothing new to share about switching off auto enhancement but hope to have panorama out soon.

He also mentions that Switching-off auto image enhancement in the Photos app isn’t coming anytime soon but it sure seems like it is planned.

Some screenshots of Panorama feature in action have already been posted by WindowsBlogItalia: 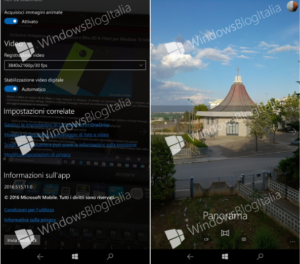 According to this screenshot, Windows Camera app version 2016.515.11.0 has the feature with a Panorama button provided along with the existing Photo & Video capture buttons. Currently, this Panorama feature is only available on new devices like Lumia 950 / 950 XL with the button hidden on devices like Lumia 1520. Compatibility with other devices is likely to be available at a later stage, it at all.

What do you think of this latest development? Let us know in the comments section.