Facebook has dropped support for some of its Windows Phone apps, including Messenger, Instagram and the traditional Facebook app itself. It also appears that the company recently pulled their key apps Facebook, Messenger and Instagram from the Windows Store for mobile devices.

At the moment, the stable versions of official Facebook apps are no longer available for download from the store, while you can still download the beta apps on your Windows Phone handset.

In the first week of June, Facebook started displaying a reminder message in its app for Windows Phone and the company has already delisted the apps download pages for Microsoft’s mobile devices. It is another step by Facebook towards abandoning Microsoft’s mobile platform and apps such as Instagram, Messenger should stop working for users at any moment. 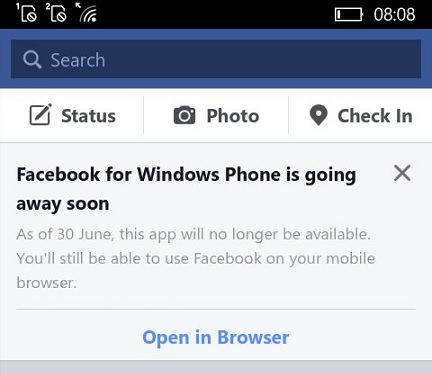 Facebook recommends Windows Phone owners to try its service in the web browser, but if you use a Microsoft mobile device, you should try SlimSocial, a third-party app that offers the best Facebook experience on Windows 10 Mobile devices.

SlimSocial is an high-rated and lightweight alternative to the Facebook app. Its ability to offer a simple and smooth user-interface makes the overall experience more enjoyable.

Last month, Microsoft ended support for Windows 10 Mobile Creators Update (version 1703) and mobile handsets such as the Lumia 640 or Lumia 540 are no longer eligible for future updates.

Microsoft is also planning to pull support for the last version of Windows 10 Mobile in December 2019. In a FAQ page, Microsoft recommended users to switch to Android or iOS for continued apps and software support.

It’s worth noting that more high-profile apps for Windows Phone could be discontinued in the coming week as we get close to the end of the servicing period.

Facebook has already announced that it would retire WhatsApp for Windows Phones later this year and the app may disappear from the Microsoft Store after July 1.