Microsoft launched the Surface Pro device in 2012 and tried to bring the PC tablet with a floppy keyboard as a laptop. The entry-level device was launched with 128GB of Storage and 4GB of RAM and came with a Type Cover.

The Surface Pro is a best-in-class laptop that offers the ability of a studio and tablet, it features a stunning PixelSense display with support for Surface Pen. The 12.3-inch display comes with a resolution of 2736 x 1824 and 267 PPI.

The pricing of the device was at its expensive at $799 for users to even think of buying the device. Users were able to use the Surface Pen and the Surface Dial with the Surface Pro despite it being the base model.

Now as part of the Black Friday Deals, the Surface Pro can be brought for £600 but is available for Surface Lovers across the United Kingdom. This is the base model with 128GB of Storage and 4GB of RAM and also includes a Type Cover.

Users looking for a 2 in 1 device with a great battery life can get the device as part of the Black Friday Deals only for £600, but you would need to be in UK to grab the offer.

Microsoft Surface Duo will get Android 11 update this summer 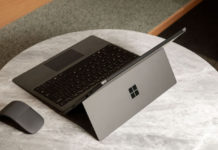