Microsoft with a partnership with audio and video device manufacturing giant Harman Kardon announced voice-activated speaker featuring Cortana with an aim to compete against both Amazon’s Echo and Google’s Home and the latest Apple’s HomePod.Now a Cortana Device Setup app for Harman Kardon’s Invoke is now available on Windows Store on Windows 10. This app allows users to setup Harman Kardon Invoke AI speakers. To set up first sign in with your Microsoft account and then type or say “set up my Invoke” to get started. After setting up you can use the device icon to manage your Invoke for looking into activity history. 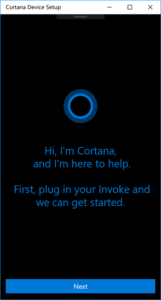 You can use Invoke to ask all your Cortana questions like set up reminders, make Skype calls, listen to your favorite music,ask about your favorite team’s scores and more. The invoke speaker which combines premium 360 degree with the power of Cortana is quite late with its entry in this market segment since the Amazon Echo was launched way back in 2014 and currently holds 70% of the total market share of smart AI powered speakers, while google launched the google home in 2016 which holds a modest 23.8% according to eMarketer.

The device is expected to debut in the United States and right now it is yet unclear whether it will be available to other regions. Let’s see what Microsoft and Harman Kardon can achieve with this one.
Have a look at the app on Microsoft store here.