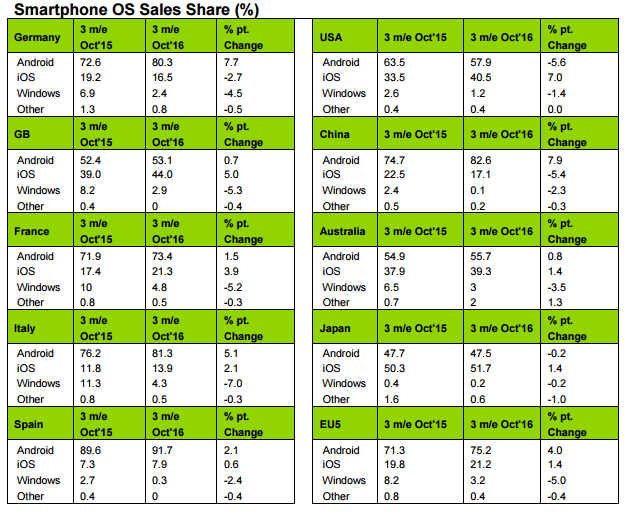 October was the month which had seen the Arrival of iPhone 7/7 Plus around the world. Inspite of not having an Headphone Jack it has not decreased the sale of the Apple device. Below are the latest number of the last three months ending October 2016.

The latest smartphone OS sales data from Kantar Worldpanel ComTech shows that iOS achieved year-on-year growth across most regions except Germany and Urban China. For the three months ending October 2016 Japan stands at the top in the list of regions where iOS holds the greatest share, with 51.7% of smartphone sales. This is followed by 44% in Great Britain and 40.5% in the US. Android market share saw similar growth across a number of regions, declining only in the US (by 5.6 percentage points), and in Japan by less than one percent.

In the US, iOS grew 7% points year-over-year, from 33.5% of smartphone sales to 40.5% in the three months ending October 2016. This represents the strongest rate of growth for the OS in more than two years, as well as the highest share seen since the three months ending January 2015 (42.8%). And while Android remains the dominant OS in the US, at 57.9% of smartphone sales, this latest data represents the 5th consecutive year-on-year period decline.

“The lack of the headphone jack has proved to be a non-issue for US iPhone consumers, as iPhone 7 was the top selling device in the three months ending October 2016, achieving 10.6% of smartphone sales, despite not being available for the full three month period. iPhone 7 Plus was the 4th best-selling device at 5.3%, behind the iPhone 6s and Samsung Galaxy S7,” said Lauren Guenveur, Consumer Insight Director for Kantar Worldpanel ComTech. “Google achieved 0.5% of smartphone sales, a strong showing given that the Pixel was only widely available from October 20th. In that short time, Google has reached market parity with more established brands like Huawei and Microsoft, who are also at 0.5%.”

“iPhone 7 was the second best selling phone in Urban China in the 3 months ending October 2016, capturing 3.8% of smartphone sales. iPhone 7 Plus also cracked the top 10 at 1.9%”, reported Tamsin Timpson, Strategic Insight Director at Kantar Worldpanel ComTech Asia. “This brought iOS share up to 17.1% of smartphone sales in the latest period versus Android’s 82.6%, and also brings Apple firmly ahead of Xiaomi at 15.9%. While it was a period-on-period increase for iOS, as we expected with the release of the latest iPhone models, they are still down versus a year ago at 22.5%. Oppo continues to gain footing in Urban China, achieving 11.8% of smartphone sales, with the R9 remaining the top selling device in the region.”

“iOS achieved year-on-year growth across most regions in EU5 except Germany, where it fell 2.7% points to 16.5% of smartphone sales. iPhone 7 cracked the top 10 smartphones sold in all regions but Spain, which remains dominated by the Android ecosystem at 91.7% of all sales,” said Dominic Sunnebo, Business Unit Director for Kantar Worldpanel ComTech Europe. “In Great Britain, as in the US, iPhone 7 was the top selling device, pushing the previous top device (iPhone SE) to third, while iPhone 6s remained the second best-selling device.”

“Android remains the dominant ecosystem, topping 75% across much of the globe, the excepted regions being those with markets most focused on premium devices, chiefly the US, Great Britain and Japan. This is not a surprise, nor should it be, as Android’s business model provides consumers with a variety of brands and pricepoints from which to choose,” Guenveur adds. “It’s unlikely that any other OS will ever reach this level of penetration. But the apparent lopsided market share figures are not a reason for doubting the strength or future of the position held by Apple’s iOS. While Android dominates in terms of the raw number of devices it powers, Apple remains the most desirable smartphone brand in the world.”