The Smartphone sales data from Kantar World Panel shows that both IOS and Android is making gains across the 5 European countries. It shows a solid 5.2% Increase in Market Share for IOS during the third quarter of 2016 to 34.2%.

“In the US, the new iPhone 7 and 7 Plus models made an immediate impact, becoming the best-selling smartphones in the month of September at 17.1%,” said Lauren Guenveur, Consumer Insight Director for Kantar Worldpanel ComTech. “Strong sales of the iPhone 7 and the lower-priced iPhone 6s, the second best-selling device in the US in September, contributed to an overall growth of iOS to 34.2% in the third quarter of 2016. 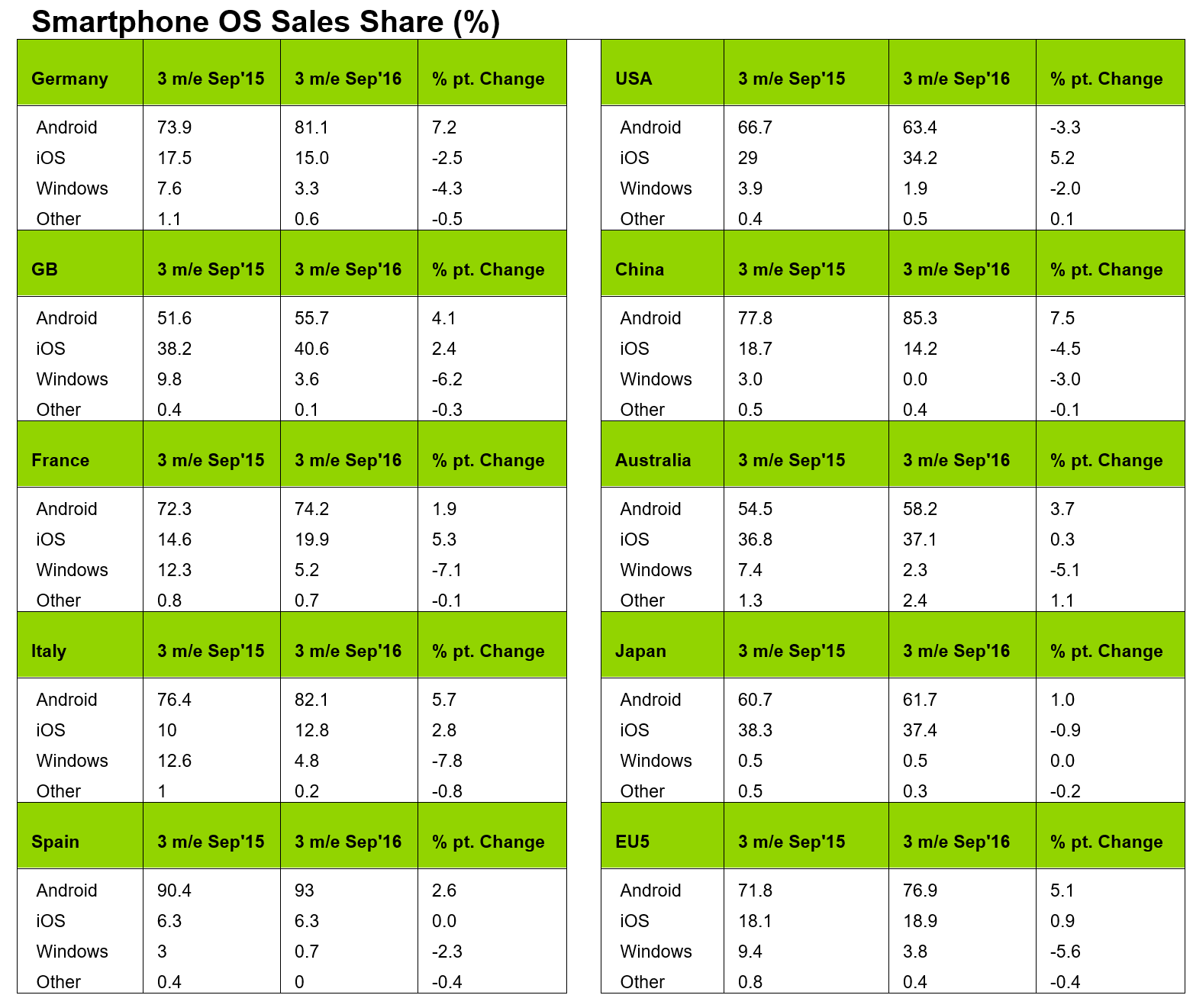 “Despite some sales from the beleaguered Samsung Galaxy Note 7, still technically available through the month of September, Samsung posted a year-on-year decline from 36.9% to 33.8% of US smartphone sales in the third quarter,” Guenveur continued. “The holiday sales season may prove to be more challenging than normal for Samsung, who competes head-to-head with Apple during this crucial time of year. Fallout from the Note 7 recall could have an unintended impact on continuing sales of other, similarly-named Samsung devices (chiefly the Galaxy S7 and S7 edge), as consumers may not always understand the difference between the model names. However, deep holiday discounts, as we saw with the Galaxy S6 last year, may counteract any expected negative impact, as the driving reason for choice among US consumers remains finding a good deal on the price of the phone.”

“In Great Britain, the iPhone 7 and 7 Plus were top-sellers during the month of September, accounting for 15.1% of sales,” said Dominic Sunnebo, Business Unit Director for Kantar Worldpanel ComTech Europe. “In the third quarter of 2016, iOS accounted for 40.6% of smartphone sales, a 2.4 percentage point increase from the same period a year ago. It’s interesting to note the continued success of the iPhone SE in Britain, accounting for 8.5% of sales in the quarter vs. a share of just 3.5% in the US.”

“Britain is the only market where Samsung made year-on-year gains, totaling 30.4% of smartphone sales,” Sunnebo added. “In Italy, Huawei replaced Samsung as the reigning smartphone leader to become the top brand sold at 27.3%, a 15.2 percentage point gain vs. the third quarter 2015. Samsung accounted for 24.7% of smartphone sales in Italy, a decline from 40.6%. In Spain, Huawei and Samsung are now neck-and-neck, with Samsung edging out Huawei 24.2% vs. 23.3%.”

In Urban China, Android accounted for 85.3% of smartphone sales in the third quarter of 2016, its second highest share ever in this market.

“Oppo continues to see significant growth, gaining 8.2 percentage points over the past year to become the 4th largest manufacturer in Urban China with 11.2% of smartphone sales. The Oppo R9 overtook the iPhone 6s as the best-selling device in the third quarter,” reported Tamsin Timpson, Strategic Insight Director at Kantar Worldpanel ComTech Asia. “iOS posted yet another year-on-year decline to 14.2% of smartphone sales in the third quarter of 2016. Importantly, this marks a period-on-period return to growth in sales, up from 13.5% in the three months ending in August. With supply constrained on the iPhone 7, and particularly the 7 Plus, this positive turn for Apple is a good sign, suggesting that as supply grows to meet demand, Apple will be able to turn the tide in Urban China.”

Its very sad for Windows Phone fans that there is no mention of the Windows OS, meaning the Market share for the Microsoft’s Windows has been declining over a period of time as against its Competitors Google’s Android and Apple’s IOS.